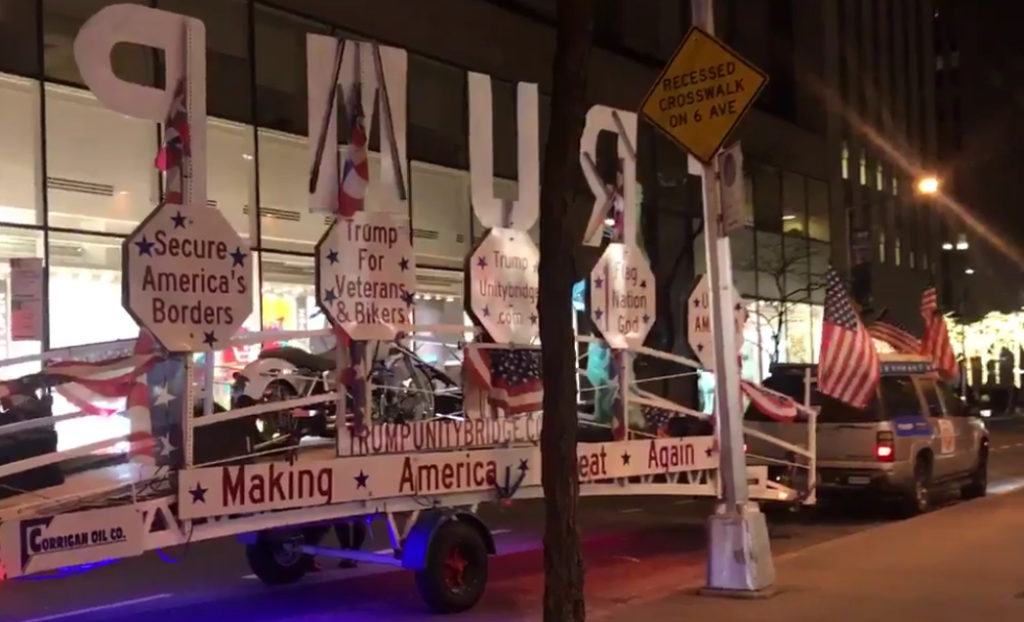 Donald Trump’s inauguration was already set to be the saddest thing ever, with a roster of musical performers so weak that they’ve become a punchline, and Trump reportedly having to hire paid seat fillers to hide the lack of audience attendance. And with a current approval rating of just 37%, most Americans are just plain sad about Trump, period. But there’s currently a “Trump” parade float outside Rockefeller Center, and if it’s scheduled to be part of the inauguration parade, it might be the saddest thing of all time.

The float in question was spotted about an hour ago by renowned book author Anand Giridharada, and it looks like something out of a county fair – and not the winning float, either. It’s got everything from campaign messages on what appear to be repurposed stop signs, to patriotic music blaring out of a bad sound system. No one yet seems to know whether it’s a float from the inauguration parade, or why it’s currently in New York City instead of Washington DC, or who might be behind it if it isn’t an official inauguration float. But the punchlines are already flying fast and furious.

One respondent to Anand’s tweet quipped “Is Trump going from NY to DC for the inauguration via float?” while another suggested it “Looks like a high school class project.” And the all white nature of the crappy float led yet another respondent to quip that it “Looks like the pictures we all see of KKK parades.”

We’re still trying to figure out just what this sad Donald Trump float is all about, but in the mean time you can watch Anand’s video of it in all its glory.