Over the past week, various observers have caught onto numerical impossibilities in the vote totals being reported by various Wisconsin precincts in the 2016 presidential election, all of them suspiciously in Donald Trump’s favor. Accordingly, various precincts have since voluntarily revised their vote totals for Trump downward, to the point that he’s now credited with five thousand fewer votes than he supposedly originally had. With a statewide recount about to get underway, officials in Wisconsin are scrambling to explain away the mounting evidence of precinct-level rigging on Trump’s behalf. The latest excuse: a “modem error.”

When online observers first noticed that precincts in the same Wisconsin county were each reporting more votes for president than total votes, a local official tried to explain it away (source: ABC News affiliate) by blaming it on human arithmetic error. But even as that resulted in more than a thousand votes coming off the board for Trump, other precincts also began revising their numbers. The result: nearly five thousand of Trump’s supposed votes simply vanished, because they never existed to begin with. With the pressure mounting, the excuses are now growing more far fetched.

One frustrated Twitter user contacted the Wisconsin Elections Commission demanding answers. The reply came from “public information officer” Reid Magney, and he tried to pass of the Trump vote-padding on a “modem not working correctly.” Apparently we’re now supposed to believe that a modem (one of those internet boxes from the nineties that made all the beeping noises) went crazy on election night and began giving extra votes to Trump, a screen cap of which we’ve posted below: 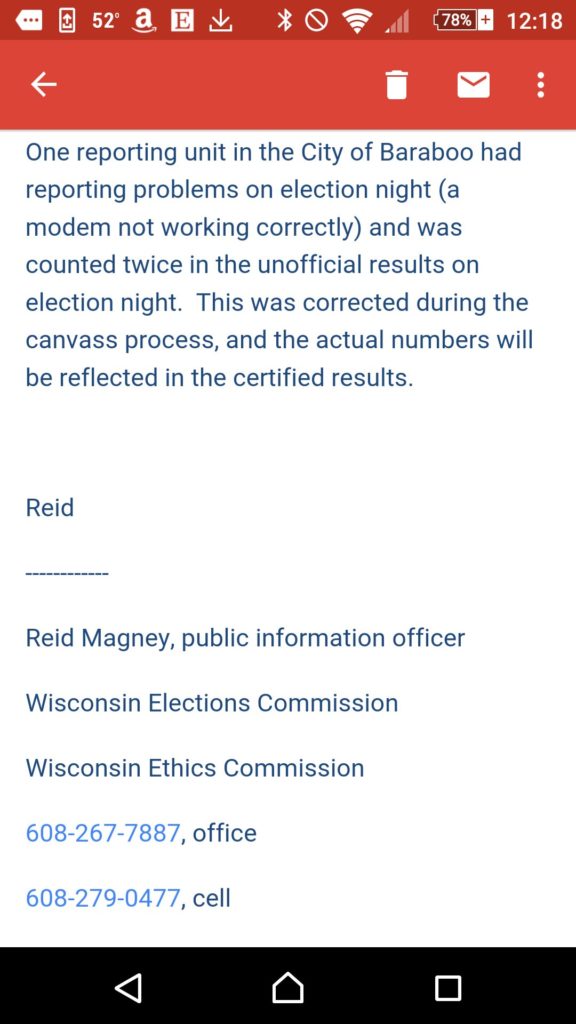 So now we have various Wisconsin election officials trying to float conflicting and increasingly absurd excuses as to how Donald Trump’s vote total was padded with a thousand extra imaginary votes here and a thousand extra imaginary votes there. First it was someone who couldn’t add, and now it’s a rogue modem, all giving Trump extra votes under the table. In total, nearly five thousand of those padded votes have already been voluntarily taken off the board in Wisconsin, as the impending recount is about to uncover how deep and wide the vote-padding for Trump truly went.

www.palmerreport.com
7076
SHARES
Facebook ShareTwitter ShareEmail this articlePrint Article
LinkedinGoogleWhatsappPinterestRedditStumbleuponBufferTumblrPocketLine
← As Donald Trump remains in hiding, his team begins whining about the recountDonald Trump still doesn’t appear to know the election was rigged in his favor →
Leave a Comment