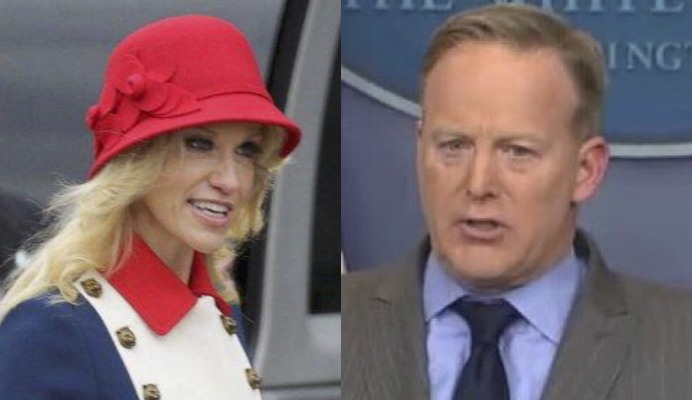 On a day when Donald Trump should have made the Michael Flynn – Russia scandal go away by firing him, Trump and his White House have instead dissolved into total chaos over the matter. In fact Trump’s two top spokespeople, Kellyanne Conway and Sean Spicer, have directly contradicted each other today regarding Flynn’s fate — painting Trump and his White House as being massively incompetent in the process.

This afternoon, Trump senior advisor Kellyanne Conway went on MSNBC and announced that Michael Flynn “does enjoy the full confidence” of Donald Trump. But within the hour, Trump’s press secretary Sean Spicer stepped up to announce that Trump is “evaluating the situation” when it comes to Flynn’s fate, making it sound like Flynn’s job is in imminent jeopardy. These two things cannot both be true.

There are only a finite number of ways in which this kind swift contradiction could take place. One is that Donald Trump simultaneously told them two different things. Another is that Trump fully changed his mind in the brief period of time between when the two made their statements. There is also the possibility that Trump was double-speaking on the matter, and that the two of them interpreted his same words differently. And then there’s the scenario in which Conway and Spicer, who have both been repeatedly caught lying over the past few weeks, were each just making things up today.

In any case it paints a picture of Donald Trump’s White House being chaotically incompetent on a level never before seen in the modern era, just three weeks in. This comes at a time when Kellyanne Conway’s credibility is so thoroughly shot that CNN is openly questioning her credibility, and at a time when Trump is reportedly already interviewing potential replacements for Spicer.

But the question may be less about how dishonest and inept Conway and Spicer are, and more about how incompetently Donald Trump is running his failing White House.

← Donald Trump may have exposed classified intel to waiters and diners at Mar-a-Lago restaurantWhite House insider: Justin Trudeau called Donald Trump an “idiot” and other insults →
Leave a Comment