Last night, for the first time in quite some time, we reported that Donald Trump began quote-retweeting the tweets of some random supporters who were saying nice things about him. This practice has gotten him into trouble in the past because some of the people he’s retweeted turned out to be less than savory characters. But last night, with a single quoted tweet, Trump managed to set off the chaos that resulted in one of the two people involved deleting their accounts and the other being involved by accident.

The trouble came when Donald Trump quoted the tweet of someone named “@drgoodspine” who had praised Ivanka Trump. The trouble: the individual in question used the wrong Twitter username for Ivanka, instead pointing to some random woman in England named “Ivanka Majic.” Trump’s detractors on Twitter rushed in with a round of punchlines over the fact that not only had Trump retweeted someone with the absurd name of Dr. Goodspine, he had also caused the wrong Ivanka to receive thousands upon thousands of errant replies. But it gets worse.

The controversy began spiraling to the point that the name “Dr. Goodspine” became a trending topic on Twitter, prompting the individual in question to quit Twitter in the middle of the night. But instead of deactivating his account or taking it private, he simply deleted his entire account: 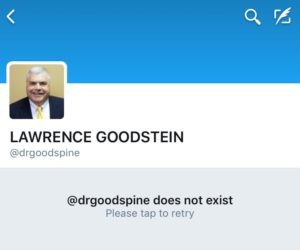 And because he abandoned his username in the process, it became publicly available to anyone who wanted it. Accordingly, someone else grabbed it and created a new Dr. Goodspine account on the same page, and is already receiving followers who apparently believe he’s the same guy who was quoted by Trump last night.

So now some guy has panicked and deleted his Twitter account, someone else took his username from him and is now impersonating him, and some woman across the pond is waking up to a whole lot of confusing replies — all because Donald Trump got bored.