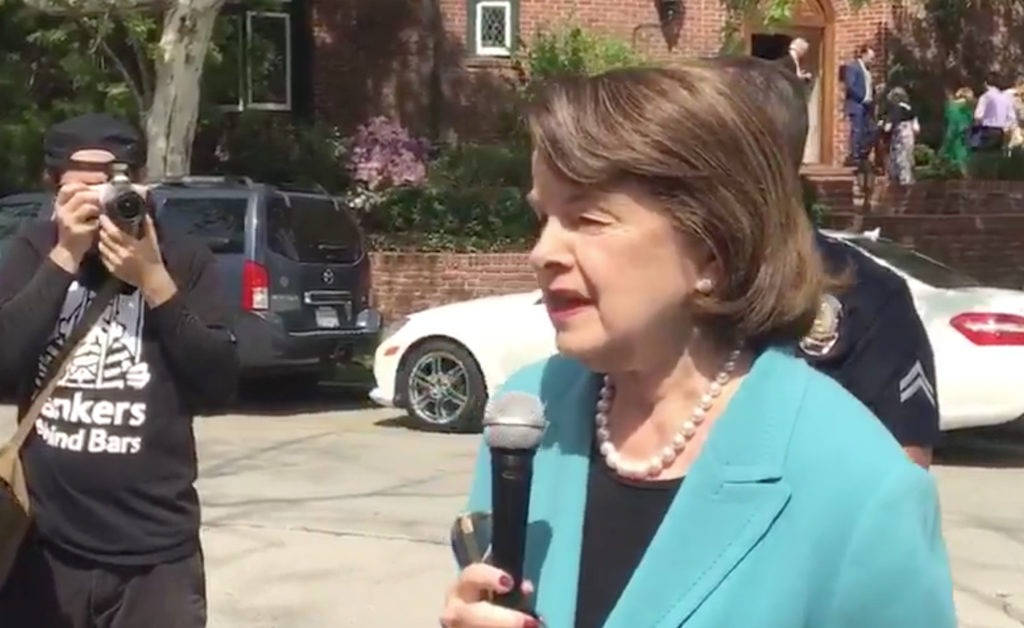 Earlier this week the two principals on the Senate Judiciary Committee, Democratic Senator Dianne Feinstein and Republican Senator Chuck Grassley, both emerged from a classified meeting with FBI Director James Comey and each looked like they’d just seen a ghost. The meeting was about Donald Trump’s Russia scandal, and whatever they learned, they seemed to have somberly concluded that the president must be ousted. Now Feinstein is offering hints at what she learned.

Senator Feinstein spoke with protesters today and took their questions in a series of segmented videos posted to Twitter by Los Angeles Times reporter Javier Panzar (clips here). One of the protesters referenced the FBI meeting which appeared to have left her so shaken, and then asked “How are we going to get him out?” in reference to Trump. Feinstein responded “We have a lot of people working at this, technical people, and I think he’s going to get himself out.”

Feinstein went on to reference the manner in which Trump is sending his sons to foreign countries to cut financial deals. She pointed out that while Trump’s actions are out of line with the Emoluments Clause of the Constitution, there isn’t any existing legislation on the books which specifically prohibits Trump’s actions, and she said that the Senate is working on a bill to formally outlaw it. But what about these “technical people” she referenced?

Her position seemed to be that if Congress can pass a law prohibiting Donald Trump from misusing his office to enrich himself financially, then he’ll either resign the presidency so he can continue his business interests, or they’ll impeach him for breaking that law. But none of what Dianne Feinstein described would require technological hacking. So when she referenced “technical people” who are “working at this,” was she hinting at the people in the intel community digging up his Russian financial connections? Perhaps she was so shaken this week because she’d just learned the extent of what had been dug up. Contribute to Palmer Report