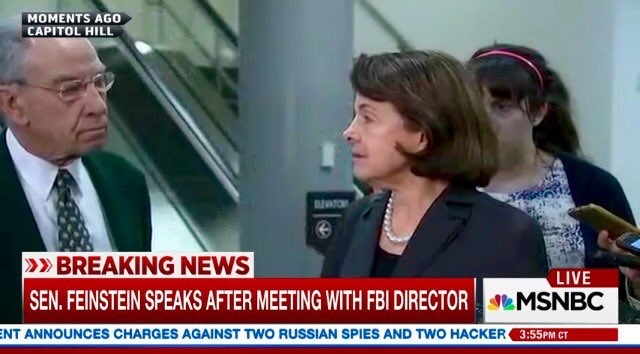 Nothing about it made sense. Democratic Senator Dianne Feinstein and Republican Senator Chuck Grassley had finally gotten the Trump-Russia briefing from FBI Director James Comey that they’d been demanding. Grassley had even threatened the DOJ just to get the briefing. And yet here they were before the cameras after their meeting, both looking like they’d just seen a ghost. We’ve only ever seen this once before.

Try walking through the possible scenarios for how their meeting went. If Comey’s briefing had been insufficient, Grassley and Feinstein would both have looked angry and defiant, and they’d have said so. If Comey had given them some evidence that Donald Trump was innocent on Russia, then Grassley would have looked relieved. But the news they received in that meeting was visibly devastating to them both. So much so that the usually talkative Grassley couldn’t muster a word. Feinstein was even making a point of protecting Grassley from having to speak at all, as if she knew that he was in an even worse headspace than she was.

There’s only one scenario that could have produced that result: James Comey briefed them on evidence so grave and so damning about Donald Trump and Russia that they both just realized the fate of nation now hinges on their ability to come together and handle it correctly. Chuck Grassley and Dianne Feinstein have been in the Senate for decades. They’ve seen it all. And yet they both had that look that we last saw on the faces of members of Congress back on 9/11.

If I’m right, then this is even more tenuous than 9/11 was, because this time around the Bin Laden figure holds the office of President of the United States – and he’ll have to be legally extricated from within. Some of the longest tenured members of our government, from both parties, seemed to just telegraph that we’re all in for the fight of our lives. They’re certainly on the same side of the fight now. And I can’t stop thinking about the looks on their faces.