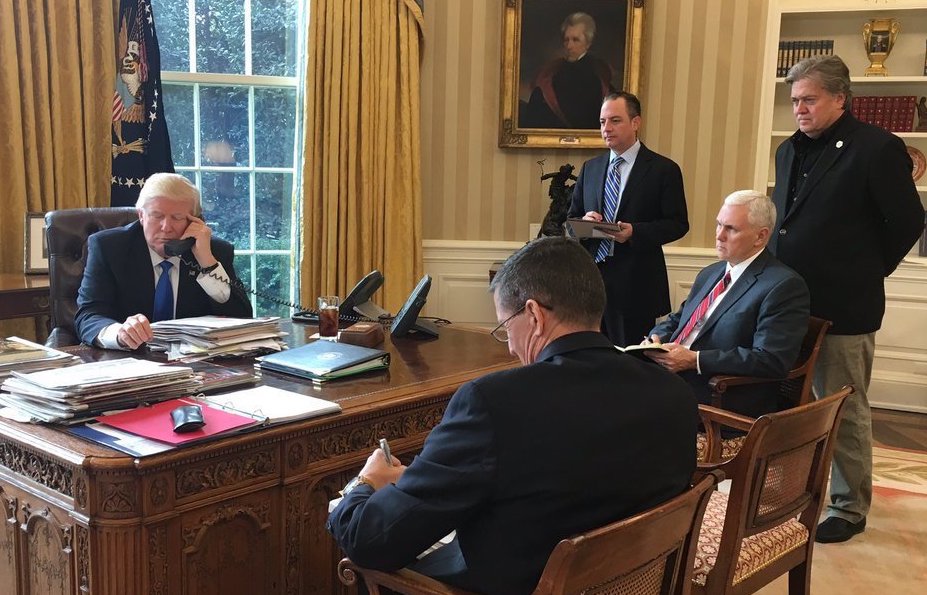 As Donald Trump’s behavior grows more extremist and erratic by the day since he took office, Americans have begun to increasingly rebel against him — including those within the government. Numerous federal employees have gone rogue by launching anonymous Twitter accounts where they’re revealing the truth about what’s going on behind the scenes. And now the most notable of those leakers has revealed that even Trump’s own most trusted advisors believe he’s misleading them on what Russia is holding over his head.

The incredible revelation came today from the increasingly trustworthy @RoguePOTUSStaff account on Twitter, which has now correctly pegged multiple White House occurrences before they happened. This time around the rogue White House staffers are leaking the details of Donald Trump’s official phone call with Russian president Vladimir Putin today. Chief of Staff Reince Priebus and Speaker Paul Ryan convinced Trump to allow Mike Pence to sit in on the phone call with Putin, over fears that Trump is too beholden to the Russian leader. And after the phone call, that distrust took a turn for the worse.

He’s Not My President

The White House leaker claims that Priebus, Pence and Ryan, which it refers to as the “unholy trinity,” made sure Trump wasn’t alone in the room when he was on the phone with Putin due to “concern POTUS hasn’t told full story about Putin attempts at blackmail.” The explanation continues: “After call, #UnholyTrinity do not seem to have had any fears allayed. POTUS behavior during call said to be suspicious… #UnholyTrinity urging POTUS that if Putin is compromising him to allow them to help. POTUS continues to deny, despite firm intelligence.”

Steve Bannon reportedly intervened on Trump’s behalf and told the others to take him at his word, in an attempt at currying Trump’s favor. But we’ve now reached the point that if this White House leaker is as legitimate as appears, it means even Donald Trump’s own top advisors believe Vladimir Putin may be blackmailing him in a manner which is influencing his actions.