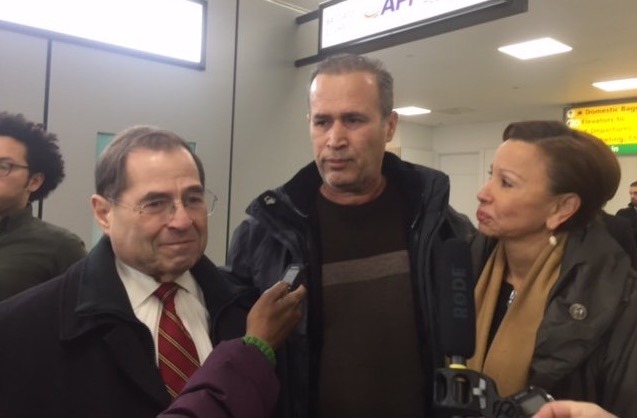 Chaos has erupted around the nation, and around the world, in the hours after Donald Trump signed an executive order banning people from Muslim nations from entering the United States. Muslims, including those who are already in the U.S. legally but had left for travel, have been trapped at airports upon their return. Thousands of protesters have overtaken JFK Airport in New York City demanding the release of a dozen people being detained here. And that fight escalated when two members of the United States Congress showed up.

Representative Jerry Nadler and Representative Nydia Velazquez, who each represent portions of New York City in the United States House of Representatives, traveled to JFK Airport today to join in solidarity with the protesters in demanding the release of the detainees. The two Congressmen demanded that airport security allow them access to the detainees, which was granted to them. The two Congressmen were ultimately able to secure the immediate release of Hameed Khalid Darweesh, an Iraqi worked with the United States military and acted as a translator. Nadler then announced via Twitter that he’s still on site at the airport, working to secure the release of the other eleven detainees.

Nadler and Velazquez held a press conference at the airport with the newly release Darweesh, in which Nadler referred to Trump’s actions as “discriminatory” and “frankly quite disgusting.” This development marks an unprecedented turn of events in United States history, which saw members of the United States Congress successfully demanding that the on-site law enforcement ignore an executive order from the president.

This also marks arguably the most direct and defiant stand which the Democrats in Congress have taken against Donald Trump to date. Meanwhile, Terminal 4 at JFK Airport is still overrun by protesters who are siding with the Muslim detainees and against Trump.