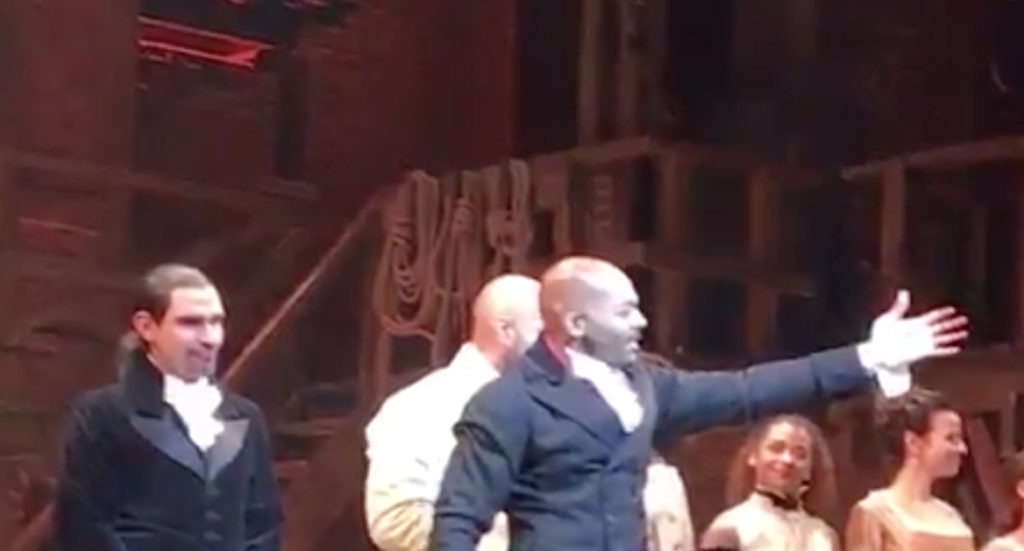 Now that Donald Trump has spent the past ten days since his illegitimate election “victory” staging one tantrum after another, while millions of Americans have to taken to the streets to protest against his erratic and racist nature, one might think his sidekick Mike Pence would take a hint and lay low. But instead Pence decided to attend the popular Broadway play Hamilton on Friday night – and he ended up being lambasted by not only the audience, but by the cast itself.

When “vice-president elect” Mike Pence first walked into the Hamilton theater, two or three people cheered him before the rest of the audience recognized him and began soundly booing him. But that was just the start of the pushback against Pence and his Trump administration. At the end of the night, the entire Hamilton cast came on stage as star actor Brandon Dixon (who portrays Aaron Burr) began reading a damning statement addressed directly at Pence. Even though Pence was already trying to sneak out the door before curtain calls had finished, the star asked him to remain so he could lambast him.

The stunningly direct criticism, which Dixon cleverly embedded into a supposed “welcome” message, began with “I encourage everyone to pull out their phones and tweet and post, because this message needs to be spread far and wide.” He went on to explain that “We are the diverse America who are alarmed and anxious that your new administration will not protect us, our planet, our children, our parents, defend us or uphold our inalienable rights.” Watch Hamilton’s stunning two minute long takedown of Mike Pence to his face in the video below:

Tonight, VP-Elect Mike Pence attended #HamiltonBway. After the show, @BrandonVDixon delivered the following statement on behalf of the show. pic.twitter.com/Jsg9Q1pMZs