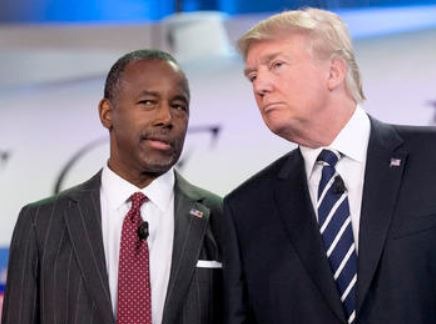 How do you manage to piss off your allies Ben Carson, Ann Coulter and Sarah Palin in a span of forty-eight hours? If you’re Donald Trump, all you have to do is be yourself and watch everything go terribly wrong accordingly. Worse for Trump, his allies have begun turning against him for different and arguably incompatible reasons. Even as he scrambles and tries to rectify things, that seems to only be costing him allies as he goes.

Even though Carson, Coulter and Palin are national punchlines among mainstream Americans, make no mistake: Donald Trump needs these three clowns if he wants to hang onto any dwindling chance of winning the election. They each have a fairly narrow but strongly devoted base somewhere on the lunatic end of the conservative spectrum. And because Trump can’t seem to win over the votes of moderates no matter what he tries, he needs to retain the favor of the three stooges and the voters they represent.

But Trump managed to turn both the nutty Sarah Palin and the purposely offensive Ann Coulter against him in one fell swoop this week as he hinted that he might retreat from his extremist anti-immigrant positions. Alt-Right pundits like Palin and Coutler have built their respective bases by convincing conservative white losers to blame their own problems and failings on minorities and immigrants. When Trump threatened to soften his racism, he threatened to cost them money. It’s why they’ve each come out swinging against him.

Ben Carson is on the other side of the cesspool. He holds xenophobic views that are just as extreme as Trump’s, and arguably more insane. But Carson has always made a point of stating his insane views in a gentlemanly manner. And so he’s drawing the line over Trump’s ongoing name calling. Specifically, Carson is offended that Trump has been calling Hillary Clinton a “bigot.”

Carson isn’t even being particularly polite about it. “That’s what people do who don’t have anything to talk about,” he’s saying of Donald Trump’s name calling. Earlier this week the good doctor called out Trump for failing to release his medical records in what seemed like an accidental backstabbing at the time. But now it appears that Ben Carson has simply had enough of Trump’s antics, and he’s willing to call him out regularly. This comes even as Palin and Coulter are attacking Trump for not using enough antics. With friends like these…

← Trump’s doctor says he would be the healthiest President ever. Obama’s jump shot disagrees.Sick bastard Donald Trump brags he’ll get the black vote because NBA star’s cousin was murdered →
Posting....
Scroll To Top