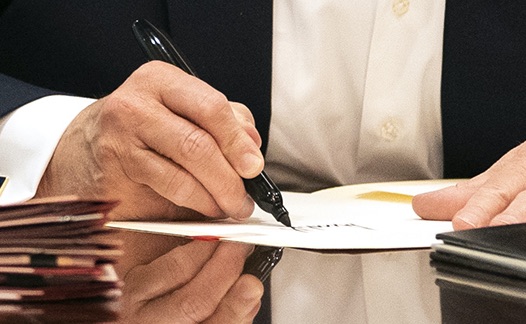 Donald Trump has now been in the hospital with a coronavirus for a day and a half, and he’s on at least his second experimental drug treatment, even as his underlings paint wildly conflicting pictures about how bad his health is. Trump’s handlers set up a photo shoot to try to paint him as still doing the job of President, but it backfired to say the least.

Trump’s handlers thought it would be a good idea to sit him at a table in his hospital room and have him pretend to sign some documents, to give the impression that he’s hard at work. But as documented by some eagle eyed folks on Twitter, they very clearly had Trump sign his name on a blank piece of paper – giving away that the entire photo shoot was a poorly staged fake.

This isn’t particularly surprising. The notion that Donald Trump would be doing any presidential work while he’s sick in the hospital with coronavirus, when he never does any presidential work even on a normal day at the White House, is absurd. Yet Trump’s babysitters are clearly worried about the growing perception that he’s too far gone to remain in office – and they’re going to panicked sloppy lengths accordingly.

Also, how far gone is Donald Trump that he’s not even questioning why they’re having him sign blank pieces of paper? Whether it’s the coronavirus, or the experimental treatments, or merely his ongoing cognitive collapse over the past year, this guy isn’t even close to having the cognitive abilities to remain in office. photo: Andrew Feinberg | Twitter

← Eric Trump is about to blow it bigWhat happens to the election if Donald Trump dies or drops out? →
Leave a Comment