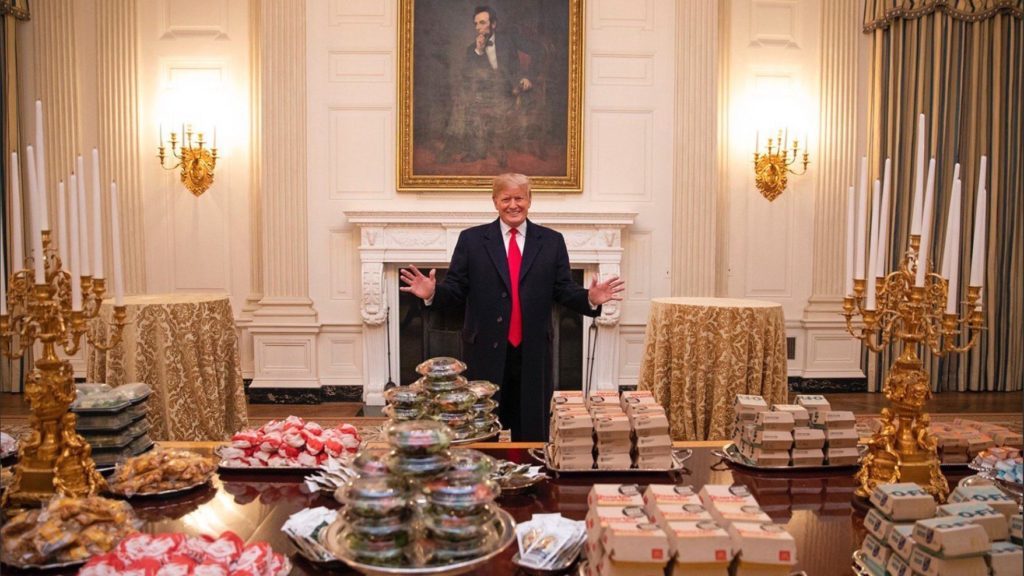 Donald Trump’s government shutdown is continuing to cause problems far and wide for millions of Americans, and yesterday we saw yet another example of it. The Clemson national championship football team visited the White House, and thanks to the shutdown, there was no food to be served. Trump thought he’d be clever by buying them a bunch of Burger King Whoppers and other fast food, and then pose with it for all to see. It didn’t go well.

Part of the problem is that Donald Trump didn’t help himself by buying the cheapest food possible, as it was yet another reminder that he’s a cheapskate who’s far too deeply in debt to spend money on anything. But then came the photos. One of them had Trump posing in front of huge piles of hundreds of Whoppers and other fast food sandwiches, while grinning like an idiot.

It’s been widely reported that Donald Trump eats fast food for most of his meals, in lieu of allowing the White House to prepare more substantive meals for him. So by buying a bunch of fast food for the Clemson kids, it seems obvious he’s simply going with his own first choice. On top of that, there are some athletes who don’t want to eat something as unhealthy as fast food, but someone like Trump wouldn’t even consider such a thing.

Various observers on social media expressed their doubt that Donald Trump even paid for the fast food out of pocket, considering his track record of never paying for anything, and never paying his bills. Most people just couldn’t getpast the fact that he actually posed with a hundred Burger King Whoppers for a photo, because he’s just that lacking in self awareness. But let’s not lose track of the real story here: the Clemson championship team had its White House visit marred by Trump’s shutdown, and it’s a reminder of just how ludicrous this shutdown is.

www.palmerreport.com
140
SHARES
Facebook ShareTwitter ShareEmail this articlePrint Article
LinkedinGoogleWhatsappPinterestRedditStumbleuponBufferTumblrPocketLine
← Donald Trump’s speech was even more of a disaster than we thoughtThe Liar-in-Chief finds a way to outdo himself →
54 Comments