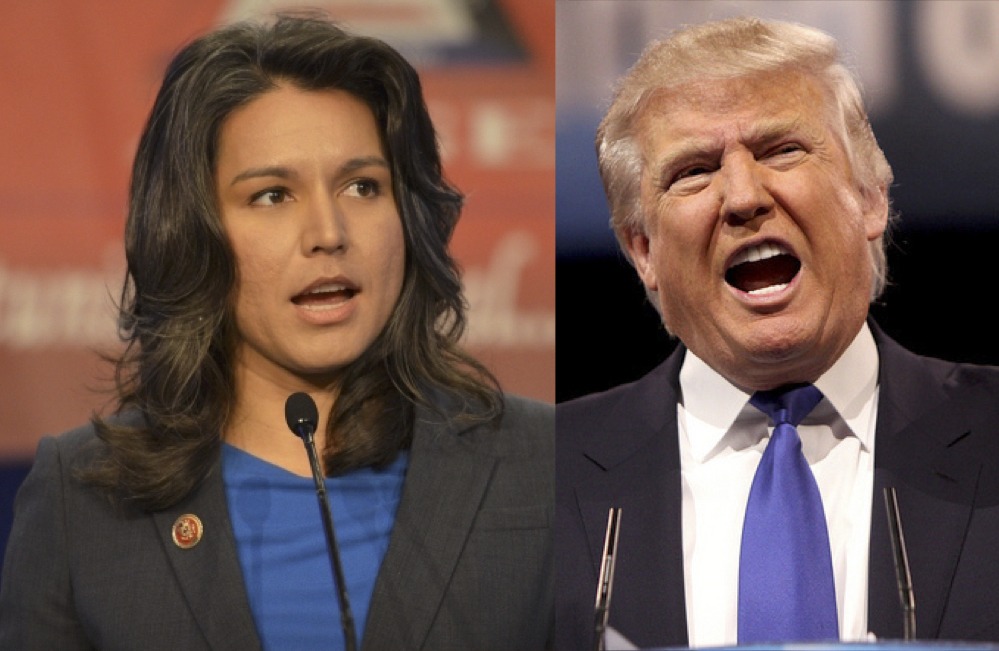 Democrats and liberals and progressives, don’t say I didn’t try to warn you about Congresswoman Tulsi Gabbard. She was the DNC Vice Chair who tried to wreck the party from within. Then she resigned and latched onto the Bernie Sanders campaign, even though she was a moderate-conservative Democrat who agreed with him on very little. And now it appears she’s already selling out Bernie and the progressives by opportunistically forming an alliance with Bernie’s nemesis, Donald Trump. And we know as much, because Gabbard spent today at Trump Tower.

Precisely what was Tulsi Gabbard doing at Donald Trump’s home residence in Manhattan today, even as the rest of the Democrats in Congress are trying to formulate plans to stop Trump’s extremist agenda? Various reports say that she’s doing plotting everything from working with Trump to sabotage the Democrats on Syria (so says The Hill), or that she’s flat out planning to join his administration in order to boost his credibility while advancing her own career (so says the Washington Times). And yet as shocking and hideous as that all sounds, based on what we already knew about Gabbard, none of it should come as a surprise.

The primary season was full of Democrats and liberals and progressives who acted like reasonable adults while endorsing one candidate or the other. Congressman Keith Ellison, among others, did a respectful and classy job of endorsing Bernie Sanders during the primary. Senator Al Franken, among others, did an equally respectful and classy job of endorsing Hillary Clinton. Senator Elizabeth Warren took the responsible position of supporting both candidates and waiting to endorse the winner. They all showed the various right ways to support one candidate or the other, or neither, or both. Tulsi Gabbard was an entirely different story.

Regardless of whom me might have been supporting during the primary, we all saw Tulsi Gabbard opportunistically try to make the primary scandalous in ways that it wasn’t, because she was hoping to oust people and move up a rung within the DNC. When that failed, she then tried to skip to the head of the line by throwing her weight behind Bernie in the most controversial manner she could think of, by resigning the DNC and falsely accusing it of scandal. And now that she’s concluded her best opportunity for career advancement is to ride the Trump Train, she isn’t hesitating to sell out those who are feeling the Bern. Some people in politics simply can simply be counted on to do the wrong thing at all times, and yes, some of them are Democrats. Tulsi Gabbard is the worst Democrat ever. Those of us who were paying attention knew it all along.

← Hillary Clinton received more votes in 2016 than any white man ever – including Donald TrumpDonald Trump renews vow to punish visa abusers, forgets to mention Melania is one of them →
Scroll To Top