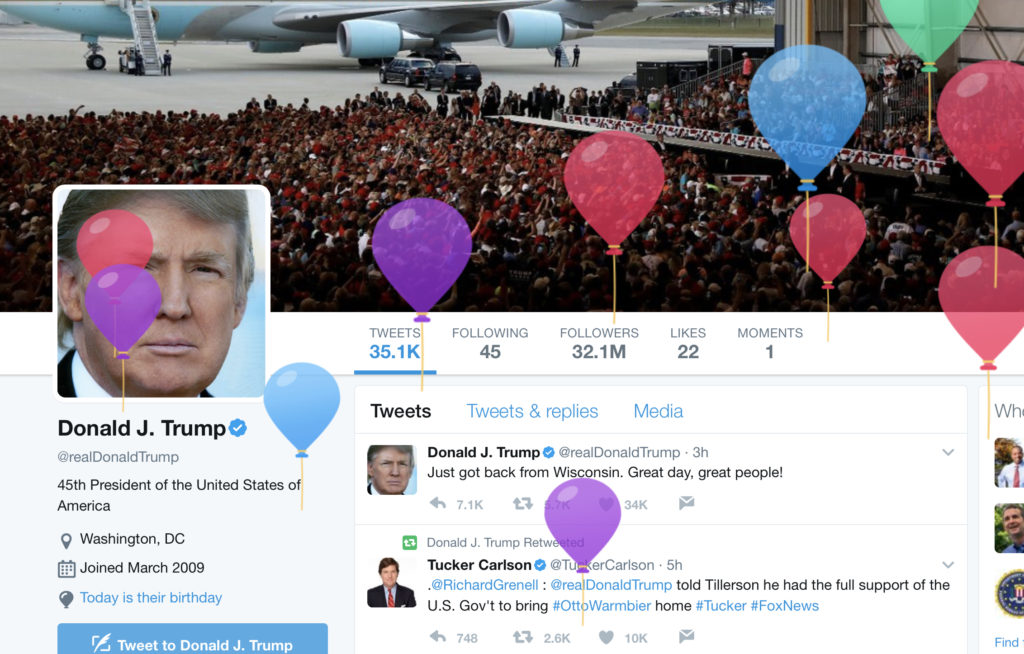 Donald Trump has spent all week promoting his own birthday in ridiculously inappropriate fashion, plugging it during cabinet meetings and elsewhere. And now that the the three year old Trump has finally turned seventy-one today, his Twitter page is covered with birthday balloons. That set off a round of heckling and backlash.

Twitter automatically places birthday balloons on the pages of all users who have entered their birthday into their profile. But not all users are aware of it, leading to some confusion when Donald Trump’s @realdonaldtrump page was suddenly covered with floating balloons once the clock struck midnight and June 14th arrived. Some users heckled him for the incongruity, while others thought he had somehow rigged it himself, or that Twitter was showing him special treatment. The responses were widely negative.

For instance there was the obligatory “hot air” joke:

#Trump gets balloons? The man IS a balloon: full of air and nothing else.

Then there was just the general weirdness of it all:

#Trump gets balloons? The man IS a balloon: full of air and nothing else.

It's trump's birthday? 😂I went on his twitter to block him & balloons came up lol

And of course there’s the Russia scandal:

Trump's twitter now has a bunch of cartoon balloons floating up when you open it. WTF is that. Some signal to Putin that all is right?

But the irony award went to the fact that the Trump-manufactured crisis in Qatar is in danger of causing a worldwide shortage of helium for balloons:

Meanwhile Donald Trump’s birthday present today is an all time low approval rating, along with a lawsuit jointly filed by hundreds of Democrats in Congress (link).