The public’s paranoia toward “fake news” over the past year has opened the door for a different kind of scam artistry: websites that try to get ahead by tricking the public into believing that real news outlets are fake. One of the most notorious scams has come in the form of a site called Media Bias Fact Check, which offers no information of the sort, and instead offers amateurish “ratings” of various news outlets. These ratings are inaccurate, useless, and changed at random. Even worse, in at least some instances, its “ratings” are simply based on information it’s cribbed from Wikipedia.

The “Media Bias Fact Check” scam is built around the premise of convincing gullible internet users that various respected news outlets are compromised because they’re “biased” in way or another. This allows its victims to believe they know something that others don’t know, and causes them to comment with links to these phony ratings in reply to articles posted from the news outlets in question. But the Media Bias Fact Check ratings often read like a fifth grader’s unfinished homework assignment or worse. For instance here’s the entirety of the “rating” for popular magazine Cosmopolitan:

“Cosmopolitan is an international fashion magazine for women and has a circulation of over 3 million. (Wikipedia) Cosmo’s primary focus is on fashion, sex and relationship tips, but they also cover politics. Cosmo has a strong left wing bias in reporting and story selection. Though biased, Cosmo usually publishes sourced information.” 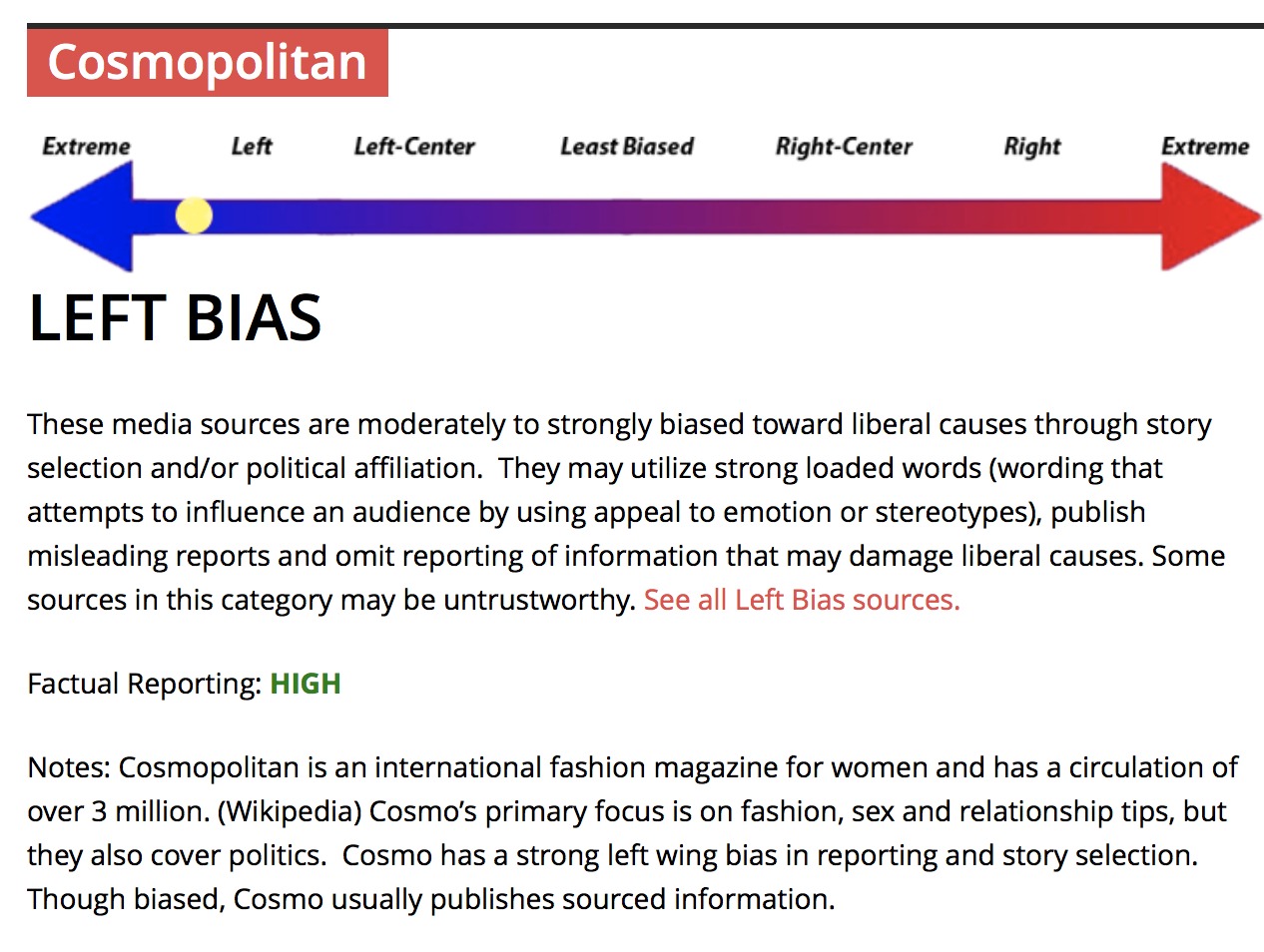 That’s it. That’s the entire “rating” provided by Media Bias Fact Check. The person who wrote this rating has clearly never so much as looked at Cosmopolitan, and has included no examples to support the “Left Bias” rating that it’s randomly assigned to the magazine. And stunningly, coming up with the above entirely useless four-sentence rating required cribbing at least one of those sentences from Wikipedia of all places. Even students get flunked for using Wikipedia as a source. Other “ratings” on this scam site are even more amateurish.

But with a scam site like this, the details don’t matter. By putting the words “Fact Check” in its name, and then assigning negative ratings to news outlets, Media Bias Fact Check is creating the phony appearance that these negative ratings are based on a lack of factual accuracy. The site is counting on gullible people not fully grasping the difference between accuracy and bias, and it’s certainly counting on its victims never bothering to read the pitiful explanations provided for the ratings it assigns, or seeing the part where it admits the site in question is factually accurate. In that sense, falling for scam sites like “Media Bias Fact Check” is no different than falling for fake news. We’re working with our contacts at the major social media networks to get these fraudulent “rating” sites banned before they do any more harm.