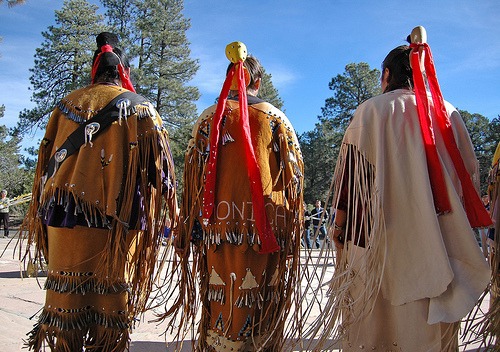 Donald Trump’s plan for a wall on the Mexican border has changed so many times that it’s difficult to determine what he’s even proposing at this point. He was going to somehow force Mexico to pay for it, then he decided U.S. taxpayers would fund it and Mexico would then magically reimburse us for it. It was entirely a wall, then it was a combination of walls with fences. And now it may be neither of those, because a Native American tribe whose reservation runs all the way to the border say it won’t allow Trump to build it.

If you’re not familiar with it, get used to seeing the name Tohono O’odham Nation, because you may be hearing it quite a bit this year. That’s the Native American tribe whose reservation in southern Arizona is larger than some states. Members of the tribe regularly cross over the border into Mexico to visit with relatives and their sacred sites, and because of the sovereign status given to Native Americans and their land in the United States, they’re not entirely subject to the kinds of border regulations that would otherwise apply.

Don’t tell that to the Border Patrol, who has been attempting to work the border on the reservation land, and who has built a small fence. But when it comes to Donald Trump’s wall, the Washington Post reported that the Tohono O’odham Nation views it as the last straw. Or as one of the elected leaders of the tribe recently put it: “Over my dead body will a wall be built.”

If the tribe can indeed stop Donald Trump from building a border wall on their land, it’ll leave his prized wall with a giant seventy five mile wide hole. And if he takes them on, he could be looking at a bloody battle against Native Americans, whom most in the United States now consider untouchable due to the history of past abuses.

← Lock him up: Donald Trump is still tweeting from an unsecured Android phoneBadlands National Park enjoys 3000% increase in popularity after climate change tweets →
Leave a Comment