On Wednesday it was revealed that Special Counsel Robert Mueller has paused his grand jury against Michael Flynn, the surest sign yet that Mueller and Flynn are hammering out a plea deal in Donald Trump’s Russia scandal. Flynn is widely believed to be reluctantly cutting a deal in order to protect his son Michael Flynn Jr, who also faces serious exposure to criminal charges in the scandal. Now that Flynn Sr is flipping, Flynn Jr isn’t taking the news well. In fact he’s flipping out.

Michael Flynn Jr has spent the past few days making vague Twitter posts suggesting that things may or may not be what they seem. However, shortly after it was revealed that his father really is wheeling and dealing with the Special Counsel, we got this tweet from Flynn Jr: 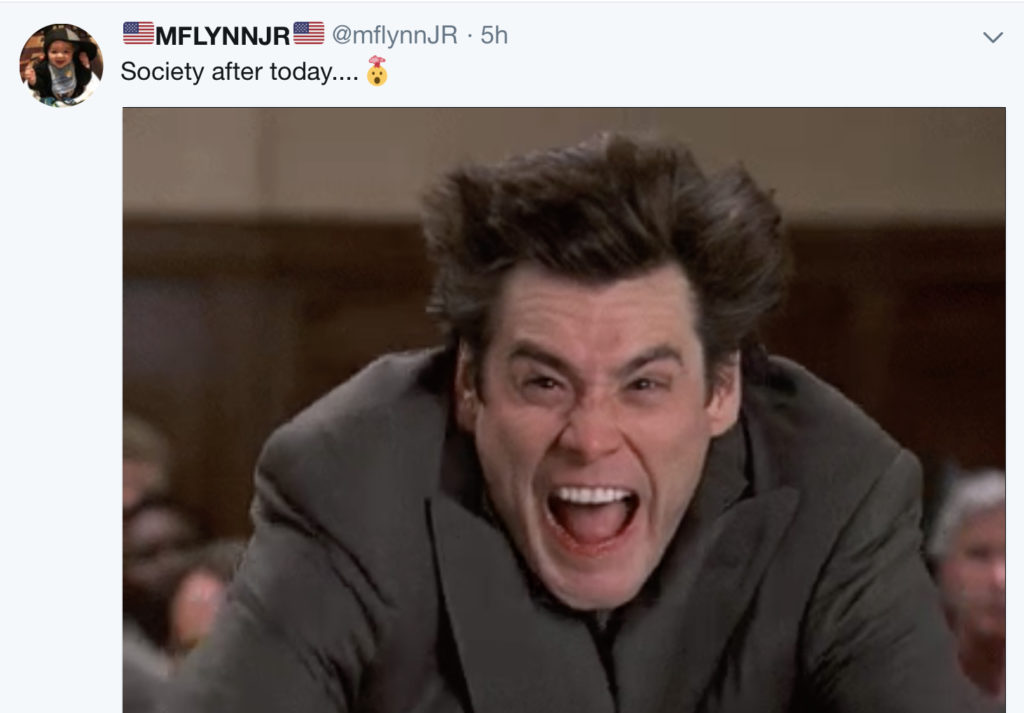 It’s not entirely clear how we’re supposed to interpret the animated GIF of Jim Carrey screaming and ripping his hair out. Is this what he expects society’s reaction to be to the Michael Flynn deal? Donald Trump’s base may be nervously tearing out its hair, as Flynn has the goods to take down Trump and everyone else involved, but mainstream Americans are celebrating the news that Flynn is flipping. In any case, Flynn Jr’s other tweets of the day suggests that he’s the one flipping out.

At one point Michael Flynn Jr attacked Fox News host Geraldo Rivera for defending Matt Lauer. At another point Junior retweeted a completely nonsensical tweet from Donald Trump about contempt citations. The other day he retweeted WikiLeaks founder Julian Assange, a key suspect in the Trump-Russia conspiracy. This guy is all over the place. We’re continuing to monitor Flynn Jr’s Twitter account because once his father formally signs a deal that gets his son off the hook, we’ll see the son being forced to suddenly stop tweeting altogether.