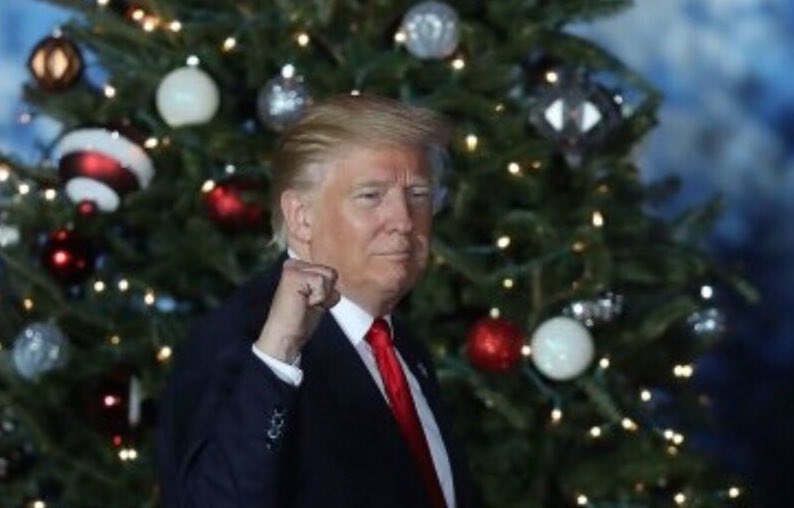 Every once in awhile, Donald Trump sets aside his usual Twitter tantrums and feuds and lies, and tries to tweet like a reasonable person. And sometimes it’s merely his staff tweeting reasonable things on his behalf. But in a sign of just how little communication and coordination there may be among Trump and those tasked with trying to make him look good online, his series of holiday tweets this weekend ended up being a mismatched and inaccurate and frankly bizarre crapfest.

Does it matter what Donald Trump tweets about Christmas or Hanukkah? In the sense that he’s assumed the title of “president-elect” and purports to be officially representing the United States of America whenever he tweets, it should matter a great deal. But his supporters don’t seem to hold him to any standard, while his detractors may be inclined to argue that we have far bigger things to worry about from Trump than how badly he screwed up his holiday messages. Still, you have to ask yourself what kind of amateur hour transition team must be in place to have allowed this series of embarrassing holiday tweets to be posted. Take a look at this mess.

First we’ve got Trump tweeting a photo of a fully lit menorah on the first night of Hanukkah, which is entirely wrong to begin with, along with the words “Wishing you a bright and Happy Hanukkah! Donald and Melania Trump.” But at least he tried, right? Except he didn’t post this. When the tweet is viewed with an app like Tweetbot which displays what kind of device was used, you can see that the menorah tweet came from an iPhone. And has been previously documented on Palmer Report and elsewhere, Trump tweets from an Android; his staff tweets from an iPhone.

Okay, so one of his staffers posted his Hanukkah greeting to his Twitter account and got the menorah wrong. Perhaps not a big deal, until today’s tweet, which consists of a picture of a non-smiling Donald Trump making a fist in front of a Christmas tree. This might be the least Christmas-y Christmas photo of all time. And on top of it, the text says “Merry Christmas! President-Elect Donald J. Trump.”

That’s right, this time his staff forgot his wife exists. This tweet also came from an iPhone. But it appears to have come from a different staffer than the one who had posted the incorrect Hanukkah tweet, because that one was labeled as being from Donald and Melania, and this one is labeled as simply being from Donald.

All of that came before this afternoon’s tweet, which simply read “Merry Christmas and a very, very, very , very Happy New Year to everyone!” We didn’t get the spacing wrong; he just doesn’t appear to know how commas and spaces work. But at least this tweet was typed by Trump himself, as Tweetbot reveals that it was in fact posted from an Android device.

The upshot here is that at least two different members of Donald Trump’s transition team appear to have direct access for posting anything they want to Trump’s Twitter account in his name. One of them was careless enough to post a wrongly lit menorah. The other was tone deaf enough to post an angry fist-making Trump on Christmas. And the second person didn’t bother to look at the first person’s tweet, or else Melania would have been listed as co-signing the second tweet.

And on top of it all, when Trump tweets things himself, he doesn’t appear to be checking to see what his staff has already tweeted in his name, or else he’d have noticed that there was already a Merry Christmas tweet recently posted to his account. It all paints a picture of Trump’s staff putting no thought into what they’re each tweeting on his behalf, and Trump himself having no idea what they’re putting out in his name. Whether one cares about Trump getting his holiday tweets wrong or not, it points to a larger and more systematic series of failures and incompetence on the part of Trump and the staffers he’s given the most trust to. And that deserves a lump of coal.