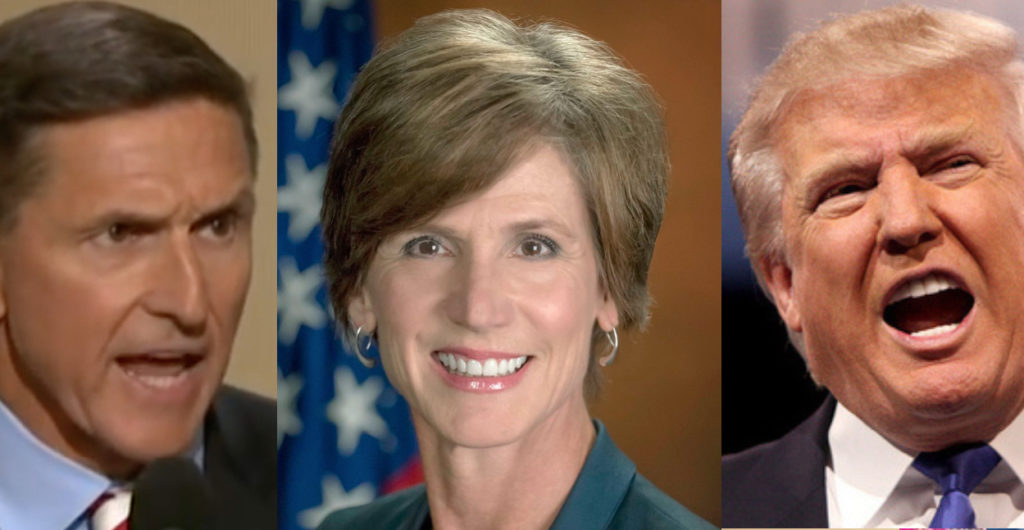 National Security Advisor Michael Flynn has resigned late tonight, a full four days after Donald Trump’s White House and the American public were made aware that Flynn had colluded with the Russian ambassador before and after election day. It’s bad enough for Trump that he lacked the guts to fire Flynn, instead cowering and hoping Flynn would resign. But the real scandal is that Flynn was taken down by former acting Attorney General Sally Yates – and it appears to be the real reason Trump fired her.

Less than two hours before Michael Flynn’s resignation, the story broke that Sally Yates had warned Donald Trump’s White House near the end of January that Flynn was a likely risk to be blackmailed by Russia. Trump took no action against Flynn at the time. But just days later, Trump fired Yates, citing her disagreement with his position on the Muslim ban. That now creates the appearance that Trump fired Yates because he knew that she was onto Flynn’s collusion with Russia, and that he merely used the Muslim ban as an excuse to get rid of her before she could take Flynn down.

Is Trump is a Russian spy?

We will be hearing a whole lot in the next days regarding Donald Trump’s true motivation for firing Sally Yates. But here’s what’s fairly clear right now: Flynn spent four days refusing to resign, but almost immediately after the Yates news broke in the Washington Post, Flynn changed his mind and resigned. That suggests that Flynn viewed the Yates revelation as being so damning toward the Trump White House that he suddenly wanted to bail as quickly as possible.

This now provides multiple angles for why this just became Donald Trump’s Russian Watergate. He appears to have fired Sally Yates in order to prevent her from taking down Michael Flynn over Russia. In turn, Michael Flynn appears to view the Yates news as a reason to get away from Trump before the whole thing explodes. Flynn is now a free agent who will either blab about Trump or simply run home to Russia, either of which will be terrible for Trump. And we have yet to hear from Yates, who can now get her revenge on Trump by laying out the timeline. Welcome to Trump’s Watergate.

← Michael Flynn has resigned over Russia scandal, and Donald Trump is in a shitload of troubleMichael Flynn’s resignation letter implies Donald Trump knew about Russian collusion all along →
Posting....
Scroll To Top