Now that Donald Trump has taken the overreaching and potentially presidency-ending move of firing FBI Director James Comey in an attempt at making the Russia scandal go away, all eyes are on Trump and his allies to try to figure out what antics they might be plotting next. It turns out Trump’s close ally Rudy Giuliani, who had been laying low, has suddenly surfaced at Trump’s hotel in Washington DC this evening.

There is real time photographic evidence that Giuliani is at the hotel, as a woman ran into him at the hotel and took a selfie with him (link), which she posted to Twitter moments ago: 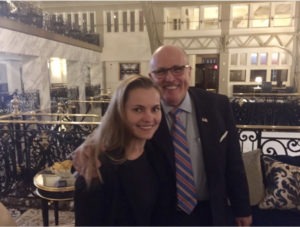 We’re still attempting to track down what official reason Rudy Giuliani might have had for having been at the Trump International Hotel this evening. We’ve determined that Jack Posobiec, fresh off his still undefined involvement in the leak of Emmanuel Macron’s emails, was also at Trump’s hotel tonight (link). But the reemergence of Giuliani, who has essentially been in hiding he got in trouble over his involvement in the U.S. trial of Reza Zarrab, is noteworthy considering that it comes just hours after Donald Trump fired James Comey.

There is virtually no chance that the Senate would confirm Rudy Giuliani as the new FBI Director even if Trump were to nominate him. Giuliani is too tainted by the Zarrab scandal, as well as his role in leaking details of an FBI investigation during the election with the intent of tainting the election. It’s all added up to make Giuliani radioactive. But now that Trump has gone to such a rare headspace that he mistakenly thinks he’s going to get away with firing Comey, does he also mistakenly believe he can replace him with Giuliani? Help fund Palmer Report