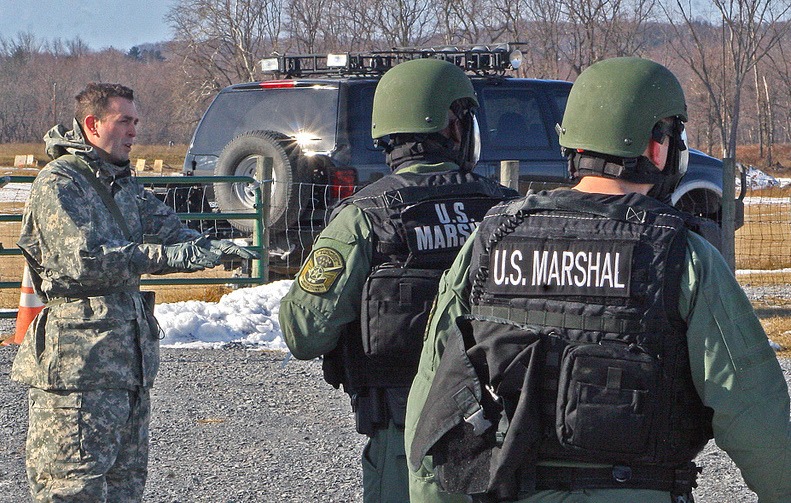 What does a Constitutional crisis look? Take a look out the window. Hours after Donald Trump issued an executive order banning Muslims from seven nations from entering the United States, four different federal judges issued stays which immediately and temporarily overturned the order. Under the Constitution, federal agents must now comply with the court ruling. But there’s currently a standoff right now in Dulles Airport which could end in Border Patrol agents being arrested by Federal Marshals.

After the judges issued their rulings last night, Border Patrol agents in most airports released the Muslims who were being detained. But that didn’t happen at Dulles Airport in Washington DC, where detainees are still being held. This represents a direct violation of the court order. AFL-CIO Special Counsel Damon Silvers has revealed that attorneys on the ground are seeking a contempt order from the courts, which would leave the Border Patrol agents two choices: comply with the court ruling, or be arrested. Attorney Christine Brandt has confirmed that under this scenario, the court would send Federal Marshals to arrest the Border Patrol agents.

Meanwhile U.S. Congressman Jamie Raskin, who is also an attorney and a law professor, attempted to gain access to the Dulles detainees less than an hour ago, but was turned away by Border Patrol agents. That means the agents are refusing to allow the detainees access to an attorney seeking to represent them, and turning away a Congressman who was attempting to act upon a federal court ruling. And his fellow Congressman Gerry Connolly was spotted moments ago at the airport, yelling at the Border Patrol headquarters over the phone and demanding that they comply with the federal court order.

If the federal judges involved do send Federal Marshals to Dulles Airport to serve the Border Patrol agents with a contempt of court summons, it’s not clear whether they would comply or choose to be arrested. But with agents of the Executive Branch now openly defying a ruling of the Judicial Branch, which Constitutionally has the final say in these matters, the U.S. is now facing the kind of Constitutional crisis which even Richard Nixon refused to force before he resigned.