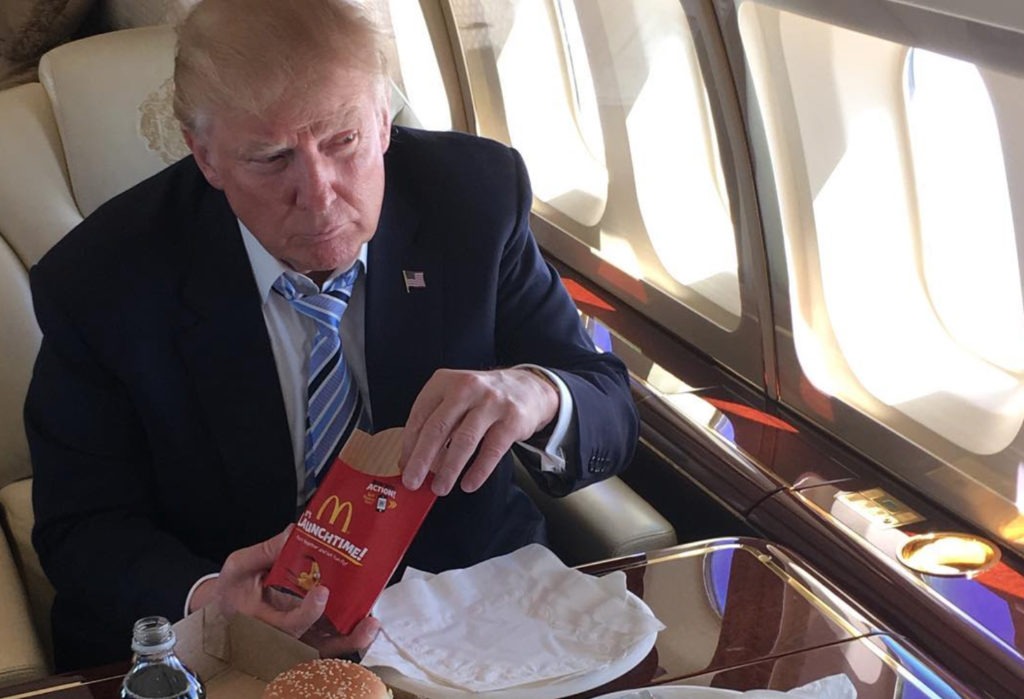 I feel dirty even writing about this topic. And yet now that Donald Trump has taken this election to a whole new dystopian level by openly speculating about the health of his opponent Hillary Clinton, while publishing a comically fraudulent letter from his own doctor which suggests he’s hiding something, it’s forced an examination of his own health. More specifically, by his own admission, Trump has been losing an alarming amount of weight during his campaign.

I should say that I couldn’t care less about the relative weight of any politician. I despise Chris Christie, but I cringe when I hear fat jokes about him. There are so many corrupt aspects to that man’s life and career, so why focus on a physical attribute which has nothing to do with his qualifications or character? I couldn’t care less how much Donald Trump weighs – except when it specifically comes to his unexplained weight loss while on the trail, under circumstances where it’s typically almost physically impossible for candidates to lose weight.

The presidential campaign trail is grueling, particularly for those candidates who make it all the way to the general election. Travel is constant. Regular exercise routines go out the window. Meals are scattershot. Sleep is inconsistent. Candidates gain weight while on the trail. It’s a recipe for weight gain, and to be expected. And yet Donald Trump, by his own words, lost fifteen pounds during the first eight months of his campaign alone.

That just doesn’t sound right. Trump has admitted that he isn’t getting his usual exercise from his golf games while he’s campaigning. He’s also been seen eating one unhealthy meal after another while on the trail, a necessary part of campaigning, while schmoozing at landmark restaurants in various cities. And Trump himself has posted photos of himself eating fast food ranging from McDonald’s to KFC while on his private airplane, the one time he probably could be eating a customized healthy meal. So why is this guy losing weight?

While researching this article I looked at hundreds of publicly posted pictures of Donald Trump from various points in time during the course of the election. I couldn’t spot whether he really lost the fifteen pounds from April 2015 to December 2015 as he claims. Nor could I determine whether he’s lost additional weight since then. Because he’s nearly always wearing a blazer while on the trail, it makes his relative girth difficult to determine in photos. Again, I couldn’t care less about his physical appearance. I’m just trying to figure out the unexplained weight loss can of worms that he himself opened.

But when a seventy year old man is asking to be elected President, and he refuses to give the public any information about his health beyond a phony doctor’s note that reads like it was written by a kindergartner, and he keeps making up random claims about his opponent’s health which force the narrative in that direction, it’s fair and even necessary to ask scrutinizing questions about the candidate making the accusations.

Donald Trump tells us he lost significant weight on the campaign trail, under circumstances that should have made it impossible to do so. Was he lying about the weight loss for ego reasons? If so, he’s needlessly created questions about his health. And if he really did lose that much weight during the first half of the campaign, what’s the real reason? Is he still losing weight while sleeping poorly and getting no exercise and eating McDonald’s? If so, the public deserves an explanation for the weight loss from Trump’s real doctor, if he even has one – and not from a lackey who merely describes his health as “astonishingly excellent” and expects the public to take the rest of it at his word.

← His campaign is just a cash grab: Donald Trump is blowing off public rallies to meet with investorsDonald Trump will burn in hell for his sabotage of the Clinton Foundation charity and the lives he’s costing →
Posting....
Scroll To Top