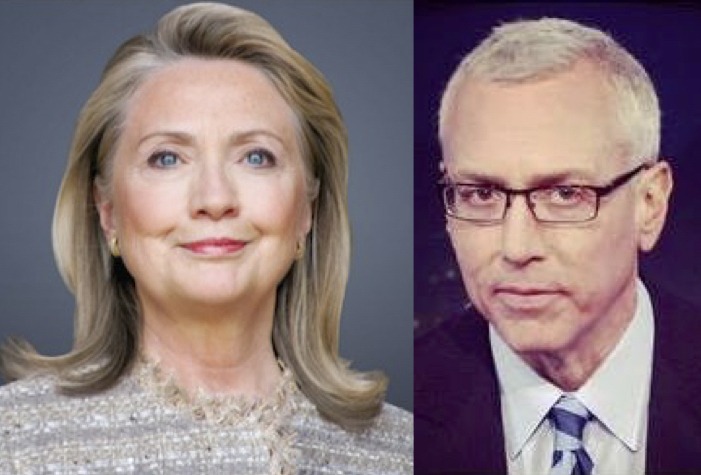 My (real) doctor’s office is located on one of the upper floors of the CNN building in Los Angeles, as CNN only uses the first ten floors. One time I happened to share an elevator with a television doctor, Drew Pinsky, who was on his way to tape his CNN show. We had a pleasant exchange on the ride up. Now that I’ve heard his dangerously irresponsible remarks about Hillary Clinton’s health this week, if I’d known what an ignorant tool he was, I might not have been so pleasant. But I guess I won’t be seeing him on that elevator again, because CNN just abruptly canceled the quack’s show entirely.

Dr. Drew, an actual medical doctor who is better known for his hosting duties on the television reality show Celebrity Rehab and the FM radio dating advice show Loveline, offered up a bizarrely inappropriate critique of the health care that Hillary Clinton’s doctor was providing to her. It prompted more legitimate doctors to quickly pick apart his nonsensical supposition, as the public slammed him for it. Even longtime Clinton hater Newt Gingrich was so taken aback by Pinsky’s faux-diagnosis that he ended up defending Hillary on the matter.

And now, just over a week later, CNN has canceled “Dr. Drew On Call” entirely. Naturally, both he and the network are claiming that the decision was mutual, and that it had nothing to do with his dangerously irresponsible (and ultimately inaccurate) remarks about Clinton’s health. But no one’s buying that explanation; the show had been on the air for five years, and now poof, it’s gone.

In fact Donald Trump’s attempt at getting the nation to randomly speculate about Hillary Clinton’s health has instead turned the focus back on his own health, and more specifically, the comically fraudulent letter that his own gastroenterologist had submitted back in December vouching for him. That doctor finally admitted this week that the letter was a sham. He also violated HIPAA in the process, meaning that fraudulent doctors are falling by the wayside left and right this week.

And so now I know that the next time I go to visit my real doctor, I won’t have to suffer another elevator ride with the tabloid doctor. Drew was a funny guy. They were playing a commercial for a really bad upcoming movie on the TV screen inside the elevator, and he made some good cracks about it. But if I’d known about him what I know now, I wouldn’t have found it funny. Good riddance. Who would have thought that my tenure of visits to the CNN building would end up lasting longer than that of Dr. Drew?

← Sick bastard Donald Trump brags he’ll get the black vote because NBA star’s cousin was murderedBy declining to stand for the National Anthem, at least Colin Kaepernick is standing for something →
Leave a Comment