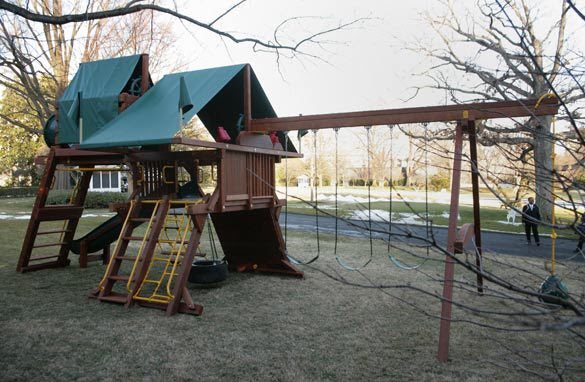 The story sounded so on the nose, and so over the top, that some on the internet have mistaken it for being a fake story. But as it turns out, Donald Trump really has decided to get rid of the swing set that President Barack and Michelle Obama had installed on the White House grounds for their children, Sasha and Malia. In fact the Obamas offered it to Trump so his own children and grandchildren could use it, and he still turned it down.

The Grinch-like story comes from CNN reporter Betsy Klein, who tweeted earlier today that a White House official has confirmed Donald Trump rejected the Obamas’ offer to keep the swing set on the grounds, and she also posted the above photo of the swing set in question. After Trump rejected it, the Obamas decided to donate it instead, and it will be hauled away.

It’s not yet been revealed why Donald Trump rejected the swing set. Was it a symbolic attempt at sticking it to President Obama? Or is it a sign that Trump does not intend to ever have his own young son Baron or his various young grandchildren at the White House? Or perhaps Trump intends to use taxpayer money to have a gaudier White House swing set installed that’s more in line with his garish tastes.