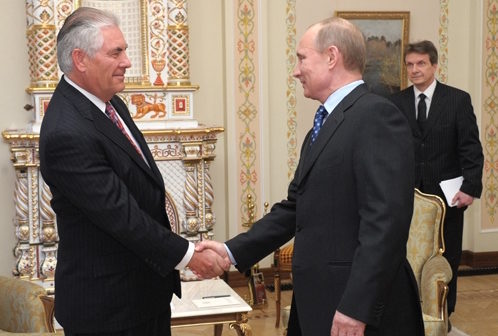 In the days since Donald Trump named Exxon-Mobil CEO Rex Tillerson as his pick for Secretary of State, there has been significant focus on Tillerson’s longtime personal and professional and financial ties to Russian President Vladimir Putin. But even as those ties have faced increased scrutiny, someone has rather clumsily tried (and failed) to bury those connections. In fact Tillerson’s Wikipedia page was edited to remove one of his most blatant ties to Putin.

Shortly before Donald Trump announced that Rex Tillerson would be his Secretary of State nominee, the bio box on the right side of Tillerson’s Wikipedia page had a category called “Awards” and it listed “Russian Order of Friendship (2013).” This was a very real award given to him by Putin, and it’s been documented by the Washington Post and elsewhere. But immediately after Trump announced the Tillerson pick, the ‘Friend of Russia’ award was deleted from the Wikipedia page.

The vanishing act was caught by Jerusalem Post bureau chief Michael Wilner, who visually documented the before and after. Since that time, the matter has been corrected, and Tillerson’s Russian Order of Friendship award has been restored to its original location on his Wikipedia page. So who was the culprit?

The editing history for the Wikipedia page in question suggests that the Russia information was removed by someone with the IP address 50.26.251.34 – and according to an IP Lookup, the culprit was located in Potosi, Texas. That’s about two hours away from Rex Tillerson’s current hometown of Irving, Texas.