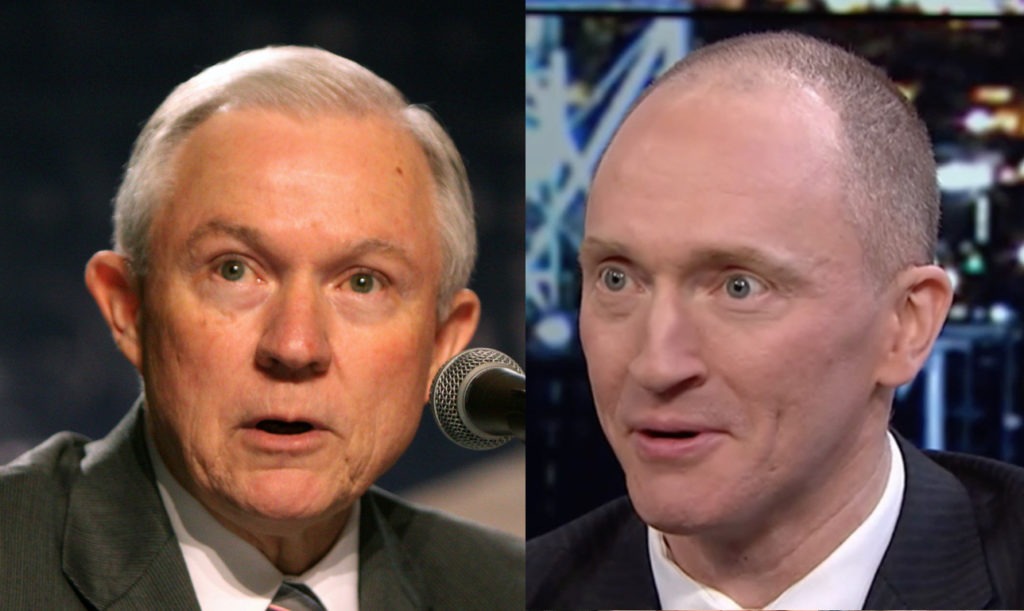 And yet another piece of the Trump-Russia conspiracy now comes together. We previously reported on the strong evidence that pro-Russia operative Carter Page was first brought to the Donald Trump campaign by Jeff Sessions or his Senate office. We’ve since been searching for confirmation of this. Now our research team has uncovered that confirmation.

It turns out the proof was hiding in plain sight all along, but obscure enough that no one has gone back and connected these dots until now. Nearly a year ago, a local CBS News affiliate in Alabama ran an online story titled “Alabama Sen. Jeff Sessions arranges meeting between Donald Trump, influential Republicans.” The story went on to state that “The team of foreign policy advisers, led by Alabama Sen. Jeff Sessions, consists of counter-terrorism expert Walid Phares, energy consultant George Papadopoulos, former Defense Department inspector general Joe Schmitz, managing partner of Global Energy Capital Carter Page and former Lt. Gen. Keith Kellogg.”

And so now we have confirmation that it was Jeff Sessions who first introduced Carter Page to Donald Trump in a meeting which Sessions long ago arranged, thanks to that CBS WHNT 19 local report. This matters much more now that both Page and Sessions are both admitting to have held multiple meetings with Russian Ambassador Sergey Kislyak, including a meeting they jointly attended with Kislyak (alongside suddenly relevant former Trump adviser J.D. Gordon) during the Republican National Convention – after they had both previously lied about doing so.

In response to the increasing scrutiny over the connections between Jeff Sessions and Carter Page, the Donald Trump campaign announced today to conservative Trump-friendly site Daily Caller that it was actually Republican operative Sam Clovis who brought Page into the campaign. But this appears to be merely a belated attempt at protecting Sessions by blaming Page on someone else, as the evidence says it was Sessions who brought Page in.

This may explain why Carter Page resurfaced last night for a bizarre interview on MSNBC in which he nervously admitted to having met with the Russian Ambassador. The new revelations this week about Jeff Sessions, a much bigger fish, seemed to have taken the focus off the more obscure Page. Logically, Page should be lying low right now. But perhaps he felt compelled to make the misguided appearance last night out of a desire to stand loyally by Sessions, who now appears to have been his mentor. Contribute to Palmer Report