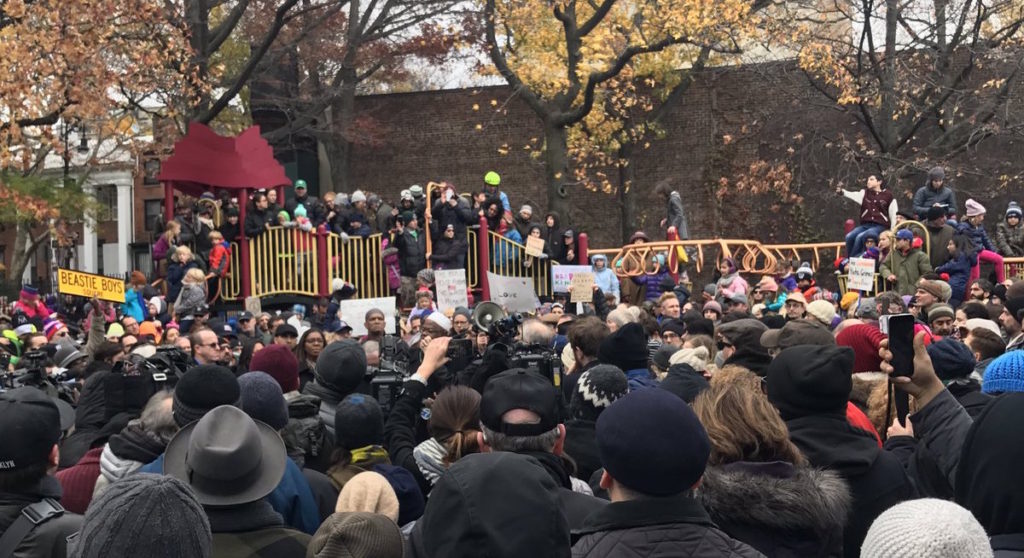 In a nondescript corner in a residential neighborhood of Brooklyn, you’ll find a playground named Adam Yauch Park. Aside from the fact that it’s named after a deceased member of the Beastie Boys who grew up in that same neighborhood, the park has never had any particular significance – until someone vandalized it by spray painting “Go Trump” and a pair of swastikas on it after election day. Now the once quiet park has become an epicenter of anti-Trump protests, led by one of the surviving Beastie Boys himself.

I’ve been to Adam Yauch Park. It’s really just a playground and a basketball court. It’s not a park that is built to hold thousands of people. And yet thousands of protesters have now gathered in and around the park, as they fight back against one of the most symbolically disgusting acts of defacement by Donald Trump’s deplorables to date. And the swastika message couldn’t have been any more clear, as Yauch was Jewish.

So is surviving Beastie Boys member Adam Horovitz, who joined the growing protest at the park as documented by the New York Daily News. The Rock and Roll Hall of Famer quickly became the crowd’s de facto voice – and he’s not pulling any punches.

Horovitz, known to Beastie Boys fans as Ad-Rock, denounced the pro-Trump swastikas as an act of “homegrown terrorism.” He went on to declare that “I reject Donald Trump’s vision for America. New York City, I’m asking you to do the same.” Despite their playful reputation, the Beastie Boys went on to spend years advocating for social justice and equality at home and abroad, and now they find themselves helping lead a new fight. Meanwhile the District Attorney for Brooklyn is vowing to bring the perpetrator of the hate crime to justice. Photo courtesy of actor Ben Stiller, who was in attendance.