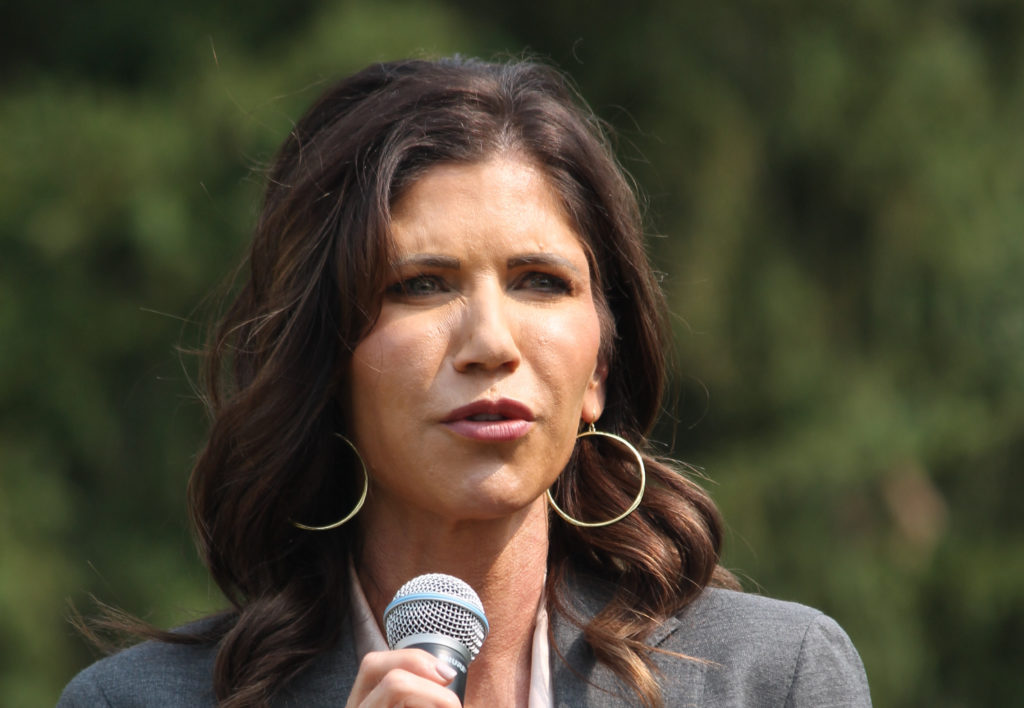 Surprisingly, the Republican Party, which is well known for embracing misogyny, is leading the way with a groundbreaking first for women. While the gubernatorial headlines of the “Pro-Life Party” are currently dominated by Purveyors of Death Ron DeSantis and Greg Abbott, Gov. Kristi Noem is making a late entry into the COVID Calamity Sweepstakes.

Being from the sparsely populated state of South Dakota — with approximately 900,000 residents, which would rank just outside the top 15 U.S. cities in population – Noem will never achieve the total death and hospitalization numbers that DeSantis and Abbott routinely achieve in Florida and Texas, respectively. But on a per capita basis and percentage increase basis, her numbers are very impressive.

The Queen of the Sturgis Superspreader has, for two years in a row, promoted phenomenal increases in both South Dakota COVID cases and the deportation of deaths en masse to other states in the region. This year, the massive Sturgis bike rally, which drew over 500,000 attendees from around the U.S., was held August 6th-15th. NBC News found that COVID cases have risen 371% in South Dakota in the past two weeks. In Meade County, S.D., home of Sturgis, cases spiked upwards by 1550%. Hospitalizations at one healthcare facility increased nineteen-fold compared to June, and patients were younger and almost all were unvaccinated.

Faced with these sobering statistics, Noem recently expressed her aggressive position against vaccines by tweeting: “If @joebiden illegally mandates vaccines, I will take every action available under the law to protect South Dakotans from the federal government.”

Aside from incorrectly implying that President Biden is about to impose a vaccine mandate (he simply urged local governments and businesses to do so), look at the thrust of her threat – she will “protect” her citizens from something that would save their lives, avoid serious hospitalizations (and the concomitant burdens imposed on our healthcare systems), and allow governments and businesses to keep their facilities open safely. Some protection she offers.

Noem may be the first female governor who truly doesn’t care about the health of her constituents. Even Alabama’s Gov. Kay Ivey, who refuses to mandate COVID vaccines or masks, has nonetheless come around to at least promoting the vaccine and publicly criticizing those who refuse to get vaccinated, basically saying they are responsible for the resurgence of COVID in her state.

It is truly trailblazing that Republicans are proving that a female governor can be just as pig-headed as a man as Chief Executive of a State. According to legend (or at least the Let it Be Gnome website), people use garden gnomes for protection and to help keep the various living things in their garden “healthy and vibrant.” But this Noem provides no protection and has no regard for the health or vibrancy of those under her care.

← Conservatives need to mind their own business on this oneThe stakes just got even higher in the California Governor recall race →
Posting....
Scroll To Top