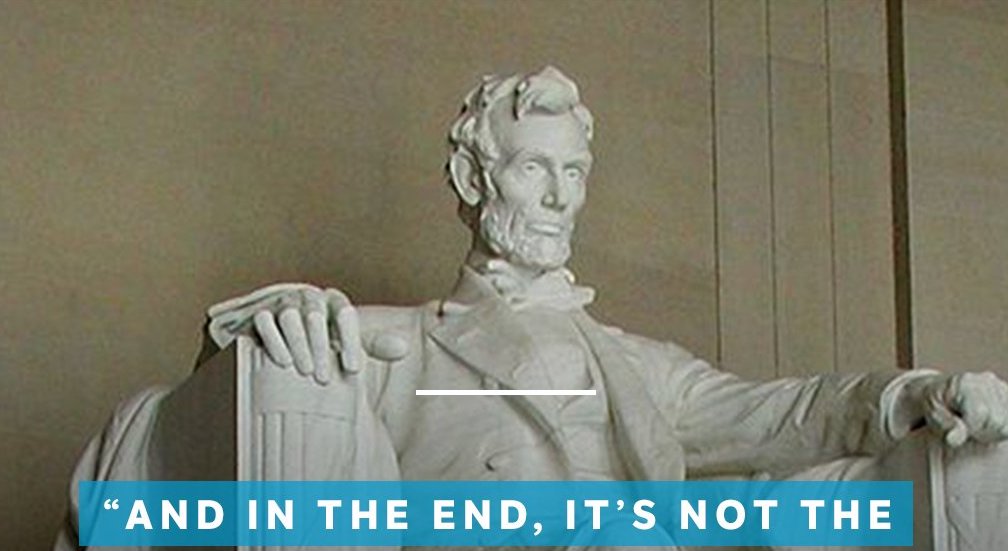 Yesterday was the two hundred and twelfth anniversary of the birth of Abraham Lincoln. We could have certainly used him in these troubled times. He would have seen the attack on the Capitol Building — the erecting of the dome of which he oversaw to completion during his term of office despite the cost of prosecuting a relentless war — as an act of disgraceful insurrection. He would have called it an example where, “If destruction be our lot we must ourselves be its author and finisher.”

Lincoln’s legacy has long been relevant and recent years have proven no exception. Barack Obama was a close admiring student of the life of Lincoln. I think it’s no coincidence that Obama made his greatest political rival, Hillary Clinton, his Secretary of State, just as Lincoln bestowed the same honor on his closest political rival William Seward.

Lincoln despised the symbols and songs and slogans of rebellion and would never countenance the word “Confederacy.” He refused to address it by its name. To Lincoln, Jefferson Davis was not president of the Confederacy but a leader of rebels. States did not secede, rather certain elements in some states were engaged in illegal acts of open rebellion. The Confederate flag was not the flag of a new nation but a hated symbol of unlawful, racist insurrection.

At no point during Lincoln’s tenure as President did a waving Confederate flag darken any government building in “Washington City” (as Washington DC was commonly known at that time) despite the nearby body of hostile forces arrayed against the federal government. To Lincoln, America was first and foremost the United States, and he gave his life to see that it remained that way.

It is fashionable these days by the terminally smug to suggest that Lincoln was a bad guy, that he was a racist. Pay careful attention to such people. They’re playing a shell game and hoping you won’t notice. They’re swapping the standards of the twenty-first century with the standards of the nineteenth and force-feeding them to people like Abraham Lincoln.

Some of these pious, sanctimonious critics wouldn’t survive a comparison with themselves today and themselves of twenty or thirty years ago. So hypocrisy is usually not far from their historical revisionism. The truth of the matter is that Lincoln was a remarkable man, a rare and subtle genius of the kind who comes along every 500 years or so. He was a man of magnificent compassion and insight who saw events clearly and manoeuvred them masterfully, and we were damned lucky to have him on our side when we did.

Abraham Lincoln would have seen Trump for who he is, a little despot, a man of no real consequence, dangerous to the extent that fools follow him, lacking talent and ability not unlike the succession of seven or eight one-term mediocrities that preceded him. And he would have never recognized today’s Republican Party. He would be shocked by what they had turned into.

Abraham Lincoln was murdered before he got a chance to oversee the Reconstruction of the South. It was his plan to “bind up the Nation’s wounds.” There can be little doubt that, under Lincoln, part of that healing would have meant that the men responsible for the rebellion would have been brought to justice. But because there was no consequence for their betrayal, the message has rippled down through history that there was something noble and romantic about that awful rebellion called the American Civil War.

The tawdry, disgusting, shameful desecration of our nation’s Capitol Building must also not go unpunished. If Trump gets away with the crimes he inspired, we will bear that burden. Trump will almost certainly be acquitted in the Senate. But he must be criminally prosecuted for the crimes he is currently under investigation for.

We have suffered as a nation because Lincoln did not live to see his work to completion. We must not allow the same to happen again, or we will pay another heavy price for it. If Trump isn’t prosecuted and sent to prison, we and our descendants will suffer because of it, and further violence and desecration like the kind that happened on January 6 will not just become inevitable but also commonplace. And, as ever, ladies and gentlemen, brothers and sisters, comrades and friends, stay safe.