Donald Trump has spent nearly two years stringing his gullible base along by pretending he was still going to build a border wall, and simply blaming his lack of progress on Congress. But this month Trump has finally decided he has to build a wall and it has to be right now – but not for the benefit of his base, whom he could have strung along forever. Instead this is clearly about him getting some kind of personal kickback. So it’s stood out that he’s also recently become obsessed with some oddly specific details of his wall.

Trump keeps insisting of late that his “wall” should no longer be a concrete wall, but instead be some kind of fence made of steel slats. Why steel slats? No one knows but him and whichever steel slat vendor has offered to personally bribe him in exchange for a $5 billion government payout. Now that Trump is on the verge of shutting down the government to try to make his “steel slat wall” happen, he’s gone so far as to post a mock up of it. The trouble? Well, take a look: 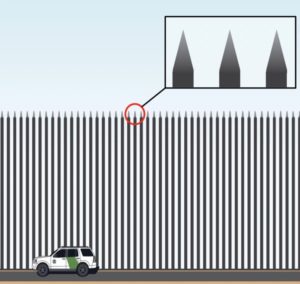 The responses were anything but positive, and it’s not difficult to figure out why. First of all, this is rather obviously a fence, not a wall. Second, these slats look an awful lot like the prison bars that Donald Trump may soon find himself locked behind. Third, the close-up enlargement of the spikes look nothing like the spikes they’re supposed to be representing. This mock up looks like something that was created by a two year old monkey.