Donald Trump and his regime routinely tweet things that are untrue, fake, stupid, idiotic, ignorant, and incoherent. This past week alone Trump has lied about a supposed imminent plot to blow up either one or four U.S. embassies, which was a major (and impeachable) lie. But the Trump regime likes to remind us from time to time that when it comes to lying, there’s no lie too small. For instance, check out what the White House tweeted on Sunday night: 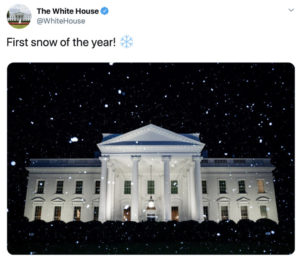 Here’s the thing: it’s definitely not snowing at the White House. At the time this photo was tweeted, the weather report said it was 51 degrees with clear skies in Washington DC. This photograph is either from years past, or it’s a photoshopped fake. This is one of the Trump regime’s most bizarre lies yet. So what gives?

Maybe it’s just the usual random gross incompetence from the Trump White House. Or maybe Trump and his goons are trying to gaslight us by pretending it’s snowing at the White House, on a day when the high winter temperatures in the northeast are an alarming reminder that climate change is severely out of control – even as the Trump regime continues to pretend climate change doesn’t exist. In any case, with all of Donald Trump’s sniffing this week, this photo makes it look like someone simply got into his coke stash.