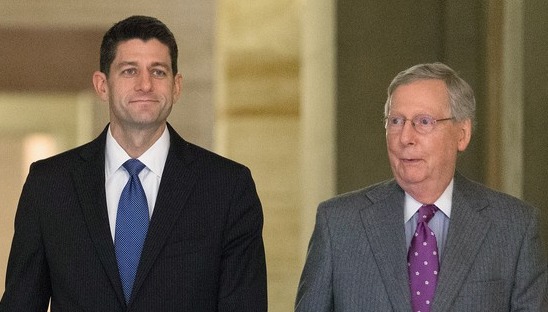 Republican Speaker of the House Paul Ryan and Republican Senate Majority Leader Mitch McConnell have spent the past year consistently proving that they couldn’t care less how many awful things Donald Trump says or does, or how much damage he does to this country. They’ve voiced cautious bits of concern here and there, but they’ve done absolutely nothing. Yet something just fundamentally changed, and Ryan and McConnell are suddenly publicly going berserk about Trump. What happened? Here’s a hint: follow the money.

How on earth could Ryan and McConnell view Trump’s current minor trade war as being worse than every other thing Trump has ever done? Simple. Up to now, Trump’s antics haven’t cost the Republican Party’s wealthy donors any money. In fact Trump’s tax scam bill and reckless financial deregulation have helped those billionaires quite a bit. But now that Trump’s back is against the wall and he’s so desperate for a random distraction from his worsening criminal scandals that he’s trying to start a trade war over steel and aluminum, it’s a different story.

Donald Trump’s new trade war threatens to cost Republican donors money. For that reason, and that reason alone, Paul Ryan and Mitch McConnell are now leaping into action to try to stop Trump before he harms any more billionaires. Trump should have known better. The GOP doesn’t care how many racist things he says, or how many women he assaults, or how badly he weakens the United States on the world stage. But now that he’s screwing with Big Money, he’s finally in big trouble with his own party. We’ll see if he backs down.