When Senator John McCain passed away last night after a battle with brain cancer, politicians from both parties lined up to pay tribute to the prisoner of war and Vietnam War hero. Donald Trump, who is still the “President” of the United States for the moment, was of course compelled to post a condolence tweet, even though he’s spent the past few years unfairly bashing McCain. Trump’s tweet was poorly received, but his Instagram post was downright creepy.

Donald Trump posted this to his infamous Twitter account: “My deepest sympathies and respect go out to the family of Senator John McCain. Our hearts and prayers are with you!” Reactions were negative across the board, both because Trump had no place even mentioning McCain’s name, and because Trump had seemingly only offered “respect” to McCain’s family, and not to McCain himself. Then came Trump’s Instagram post.

Trump posted the same words to his Instagram account, but included a giant photo of himself, instead of a photo of John McCain: 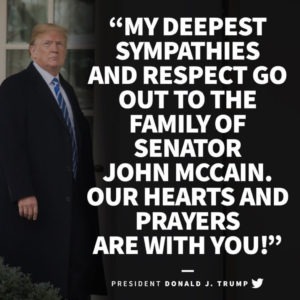 We very much doubt that Donald Trump wrote his own tweet about John McCain, and we’d guess that all of Trump’s Instagram posts are done by his staffers. Nonetheless, when you’re making a statement about the death of an American hero whose face is known worldwide, it’s just plain creepy to include a giant photo of yourself instead.