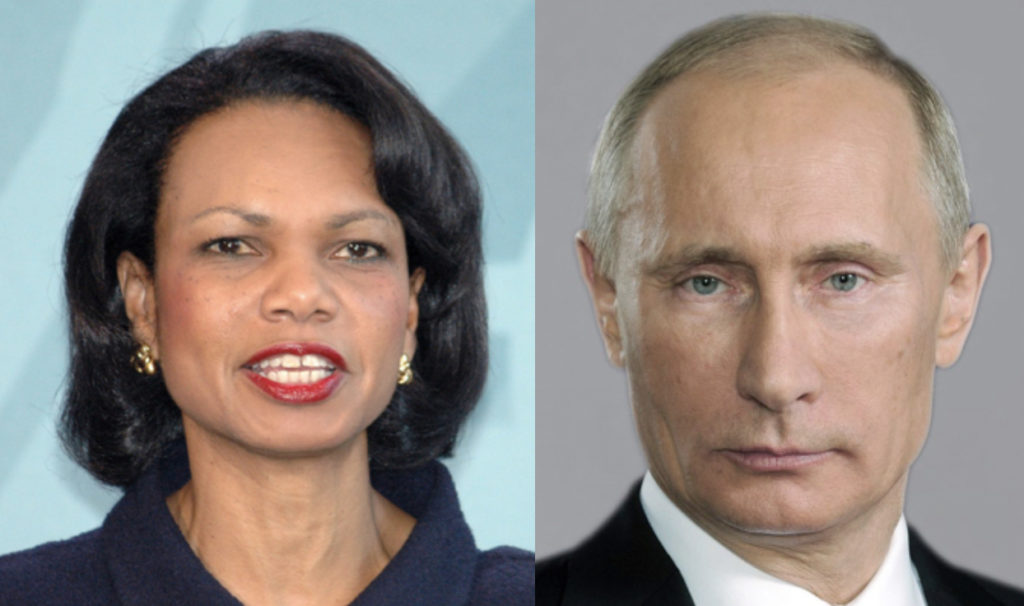 Christopher Steele, the former MI6 agent who wrote the Trump-Russia dossier, has informed Special Counsel Robert Mueller that Vladimir Putin vetoed Donald Trump’s original choice of Mitt Romney for Secretary of State, and instead steered Trump toward Rex Tillerson. This is bad news for Trump and Tillerson, as it further paints them both as willing Russian puppets. It’s also bad news for another notable political figure: Condoleezza Rice.

Although we’re now learning that it was Putin who steered Trump toward the Russia-connected Tillerson (link), it was long ago established that former Secretary of State Condoleezza Rice and former Secretary of Defense Robert Gates were trying to steer Tillerson toward Trump (link). Up to now, Rice and Gates seemed to have a bit of deniability: their firm already represented ExxonMobil, and so when its CEO Tillerson was preparing to retire, it naturally handled the process of trying to find him his next gig. But now the whole thing looks very different.

Are we supposed to believe that, even as Vladimir Putin was ordering Donald Trump to pick Rex Tillerson as a bizarrely unqualified choice for Secretary of State, someone as politically clued-in as Condoleezza Rice just happened to be coincidentally trying to steer Tillerson toward Trump’s cabinet, and didn’t know that Putin was masterminding the whole thing?

Maybe that’s possible. It just doesn’t sound believable. Condoleezza Rice’s problem is that she’s too politically savvy, too internationally connected, to make a straight-faced argument that she had no idea she was helping Vladimir Putin install Rex Tillerson as Donald Trump’s Secretary of State. We’ve been waiting a long, long time to get answers on how Rice just happened to end up repping Tillerson in all of this. Thanks to Christopher Steele, we may have our biggest clue to date. Condoleezza Rice is now officially caught up in Trump-Russia. We’ll see if it turns out she was an unwitting pawn or a willing co-conspirator.

← Steve Bannon is at it again, and something doesn’t add upPreet Bharara reveals Donald Trump’s biggest weakness →
Leave a Comment