Perhaps it’s simply impossible to perform the job of Donald Trump’s White House Press Secretary in a competent manner. Representing a “president” who constantly lies, and has no regard for the law, and who is little more than a puppet of the Kremlin, must be maddening. That may explain why Sean Spicer keeps getting worse at his job. Today he tried to announce Trump’s new executive order, but he once again crapped the Twitter bed.

We don’t like picking on Spicer (okay yes we do), but he consistently makes it too easy. He has literally one job, to communicate competently. And he just can’t do that. He looks uncomfortable enough that you can always tell when he’s lying on Trump’s behalf. He gets angry at reporters who call out Trump’s lies. He can’t speak in coherent sentences. He thinks Donald Trump is the HUD Secretary. He thinks the Canadian Prime Minister is someone named Joe. He keeps accidentally posting his own password on Twitter for everyone to see. And now today, Spicer tweeted this: 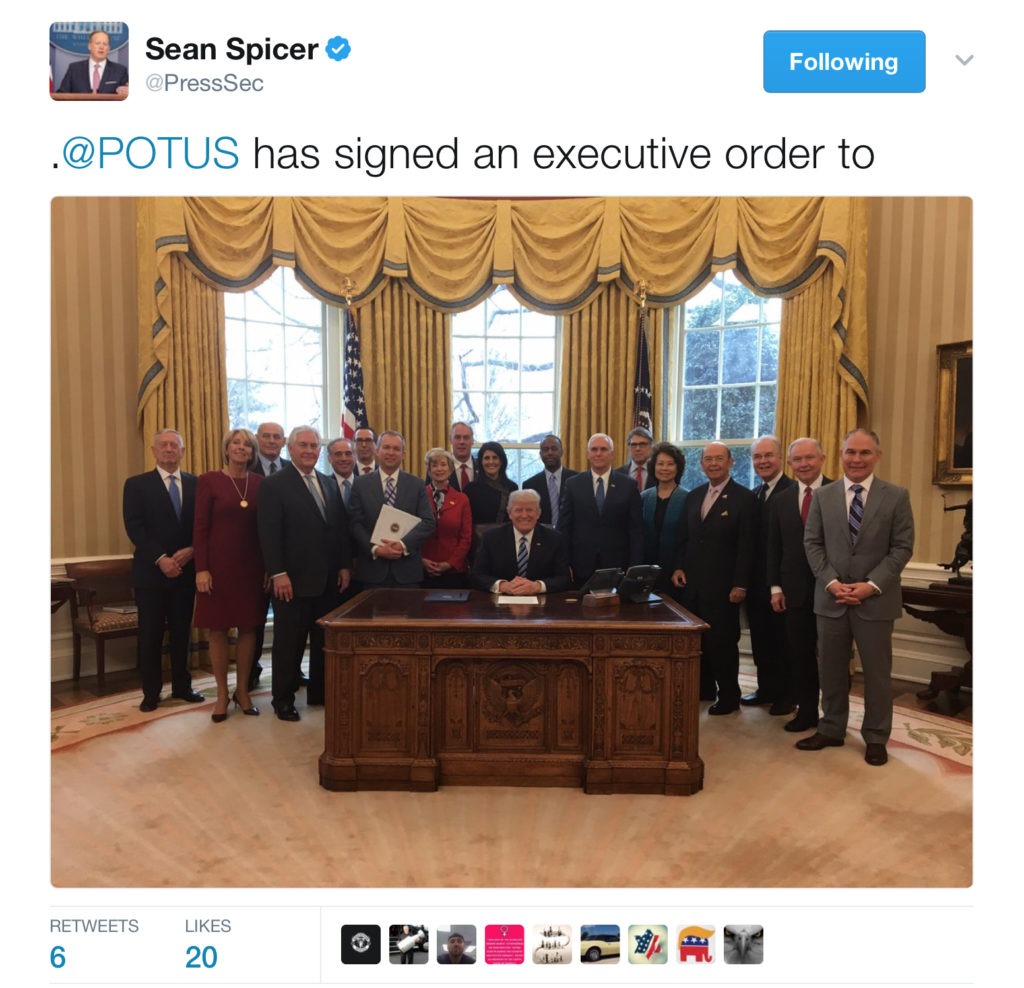 Trump signed an executive order to do what? Spicer didn’t bother to say. He just tweeted half a sentence and a picture of some people. If he were a novelist, this would be called a cliffhanger. When you’re White House Press Secretary, it’s called incompetence. Spicer later deleted his first tweet and replaced it with “POTUS w his cabinet watching, signed an exec order that requires thorough exam of every executive department & agency.”

Of course that still tells us nothing about the executive order in question. Can we have a link to it? Do we get to read what it says? We’ll report back as soon as we can hunt down the actual text of it. Maybe Spicer will get around to sharing it later. It’s not as if Trump bothered to read the executive order before he signed it anyway, so why would Spicer think we would want to read it? In that sense, perhaps the bumbling Trump and his sidekick Spicer are a match for each other.

← Meet the nine Russian operatives who have dropped dead during Donald Trump-Russia scandalHalfway through Donald Trump’s ugly first 100 days, he’s losing and The Resistance is winning →
Leave a Comment