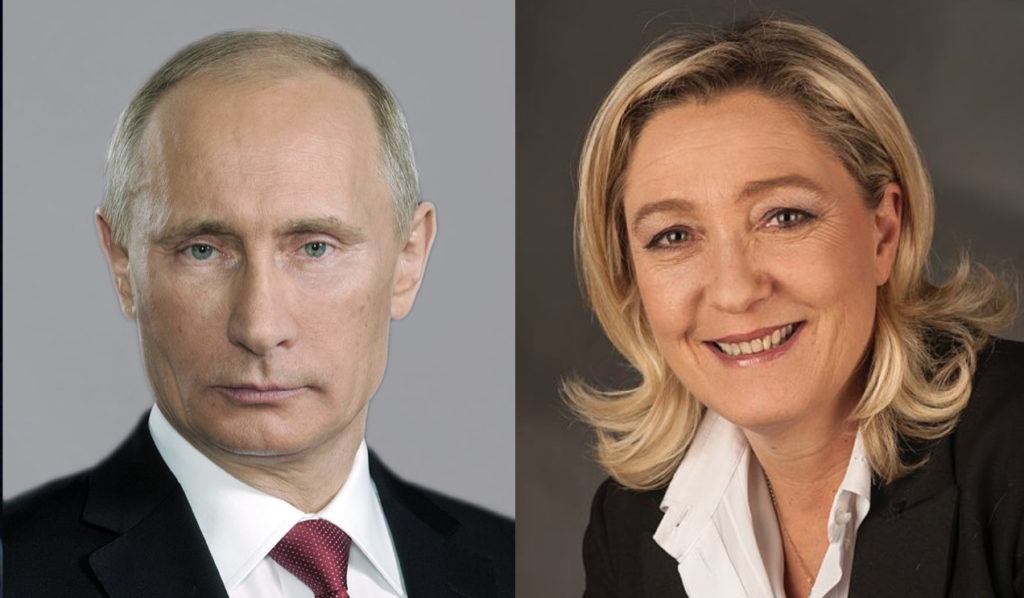 Far-right extremist Marine Le Pen is one of two candidates to advance today the final round of the French presidential election. She’s a highly controversial figure, both due to her racist anti-immigrant positions and her connections to Russia. But even as Americans attempt to determine whether Donald Trump was funded by the Kremlin, it’s no secret at all that Le Pen has been personally bankrolled by Russia.

Various major players in French politics are now uniting behind moderate candidate Emmanuel Macron, who finished slightly ahead of Marine Le Pen in today’s semifinal voting, and FiveThirtyEight now says the odds of Marcon winning are overwhelming (link). But nonetheless, there is now the very real possibility that Le Pen could end up becoming the President of France. And that’s bringing immediate new scrutiny on Le Pen’s financial relationship with Russia.

Time Magazine has already documented that Le Pen’s political party, the National Front, took out a nine million Euro (approximately ten million US dollar) loan from a bank in Moscow in 2014 (link). That means that Marine Le Pen and her party have in fact been funded by Russia. Considering the extent to which Russian President Vladimir Putin unofficially controls all major aspects of business and finance in Russia, it’s fair to say that Le Pen and her party are in fact being funded by Putin. That in turn brings enhanced scrutiny on the issue of whether Putin has been funding Donald Trump – and there is circumstantial evidence to that end.

Donald Trump has consistently received major loans from Deutsche Bank in Germany over the years; even after Deutsche began struggling financially, and even after most other banks began writing off Trump as a poor loan risk, Deutsche has continued to loan money to Trump. Earlier this year, Deutsche Bank was busted for laundering billions in Russian money to clients in places like New York City (source: CNN), where Trump lived at the time. Will it be proven that the money Deutsche loaned to Trump was the same money Deutsche laundered from Russia? Marine Le Pen’s advancement to the final round of the French presidential election may shine a brighter light on the financial relationship between both Putin and Le Pen, and Putin and Trump. Contribute to Palmer Report