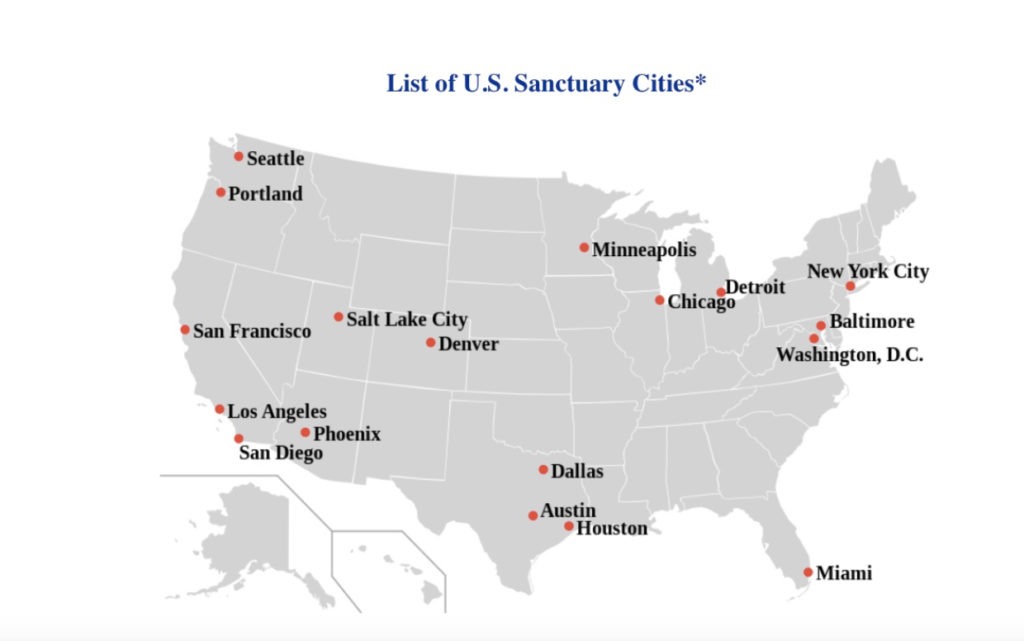 
With today’s preliminary injunction by Federal Judge William H. Orrick in California, an injunction was put in place to block a ruling of parts of the Executive Order signed by President Trump. The Executive Order declaring sanctuary cities not eligible to receive Federal grants, except as deemed necessary for law enforcement purposes, was considered overly broad by Judge Orrick.

The administration can still pursue a policy that denies funds to jurisdictions not abiding by a portion of federal law, referred to as Section 1373, that requires local cooperation with federal officials on information about a persons immigration status.

Yesterday I received an e-mail from Mayor Steve Adler’s office in Austin, Texas. It was titled “Why We are Meeting with Jeff Sessions” Here is just a short excerpt from the letter: “In January, the President offered his definition in an Executive Order that cut off federal grants from jurisdictions that willfully refuse to comply with 8 U.S.C. 1373” (link).

That’s a federal law covering communication between government agencies. Since Austin communicates freely with federal agencies and does not violate this law, it wouldn’t seem we’re a sanctuary city. But we are nervous. Last Friday the Attorney General sent letters to Chicago, New Orleans, Philadelphia, Las Vegas, Miami, Milwaukee, New York, Cook County, Illinois, and the California Department of Corrections and Rehabilitation. The letters asked for proof that they were communicating with immigration agents lest they lose federal grants to help local governments pay for things such as equipment, training, and data collection”.

A sanctuary city is a broad term applied to states, cities and/or counties that have policies in place designed to limit cooperation or involvement in the enforcement of federal immigration operations. Austin is just one of many cities throughout the United States considered an informal sanctuary city. An informal sanctuary policy is an unwritten policy that exists but is not documented on paper.

Before this Executive Order was signed by President Trump, Texas Gov. Greg Abbott had already taken back $1.5 million from the Travis County Sheriff’s Department after our newly elected Sheriff Sally Hernandez implemented her new policy on February 1, 2017, which was part of her campaign promise. Her policy informed deputies and staff of the Travis County Sheriff’s Department to not honor most warrantless requests from the U.S. Immigration and Customs Enforcement (ICE) to extend the detention of people booked into the local jail. If there’s no warrant, the sheriff’s policy agrees to detain only those charged with murder, aggravated sexual assault or human smuggling.

Austin was targeted for ICE raids, US Magistrate Judge Andrew Austin revealed. He stated during an immigration hearing that a mid-February raid in the Austin metro area was done in retaliation for Sheriff Sally Hernandez’s recent decision to limit her department’s cooperation with ICE. Judge Austin said that in a late January meeting, local ICE officials told him and another federal judge that an upcoming enforcement operation was being done in direct response to Sheriff Sally Hernandez’s adoption of a sanctuary policy in Travis County.

County Judge Sarah Eckhardt, who presides over the commissioners court, said that the programs which received the grant money would help veterans who struggle with PTSDs. The programs Abbott’s actions cut also served Children and Rehab Programs to assist Drug Addicts and Prostitutes wanting to get off of the streets and begin a new life.

So where does this leave us? I truly believe there will be many lawsuits filed against this Executive Order. Cities like Dallas, San Antonio, Seattle, New York, Philadelphia, Chicago, Los Angeles, San Francisco and possibly the state of California. These cities offer some protection for undocumented immigrants and workers to have a “Safe Place” where they can continue to work and pay taxes while raising their families and living a normal life.

The implication of this E.O. has already forced many immigrants back into the shadows causing them to pull their children from public schools and live in fear of being picked up at bus stops, picking their children up from day care or while going to church. There are some churches here in Texas and California that offer sanctuary to immigrants that have already been targeted for deportation.

The majority of these immigrants are hard working people just looking for a better life. As in every race and class of people, you will always find exceptions that break laws. There are criminals from every class of people from the poorest all the way to the White House. I really believe before President Trump and Attorney General Jeff Sessions start a nationwide round up of undocumented immigrants they need to work on cleaning their own house first. Maybe it’s time we focused on the criminals involved in the Russian Intervention of our national elections last November before proceeding down the road of immigrant deportation. Contribute to Palmer Report

← Update regarding Boris Epshteyn storyDmitry Rybolovlev is suddenly back in the U.S., and he’s once again near a Donald Trump event →