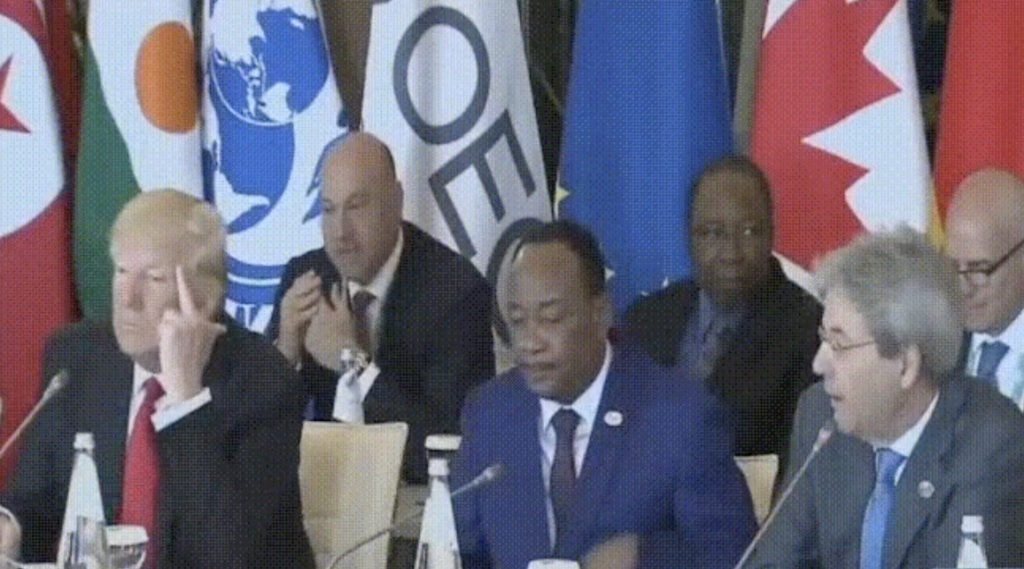 With each passing day, the fallout from Donald Trump’s disastrous overseas trip continues get worse. He insulted Germany. He shouted at the Palestinian leader. He physically shoved the leader of Montenegro. And now a video clip shows Trump appearing to give a clandestine middle finger to Paolo Gentiloni, the Prime Minister of Italy, and them smiling about it after getting caught in the act by an audience member.

Take a look at this brief video clip and decide for yourself what Donald Trump is really doing in this moment (link):

Is Donald Trump randomly scratching an itch on his temple with is middle finger, without consciously realizing what it must look like to those watching? Or is Trump pretending to scratch his temple as an excuse to intentionally give Gentiloni the middle finger while he’s speaking? Immediately afterward, Trump catches someone in the audience looking at him, and he smiles.

There have been notable historical instances in which someone very much looked like they were intentionally shooting someone the bird, when it turned out to have been something entirely different. For instance there’s an old video of Mr. Rogers giving the camera two middle fingers, but it was actually because he was counting on his fingers while singing with children. But when one considers that Donald Trump spent his overseas trip insulting, shoving, and shouting at foreign leaders, it’s not a stretch to interpret his middle finger moment as having been very much intentional. Follow Palmer Report on Facebook and Twitter.