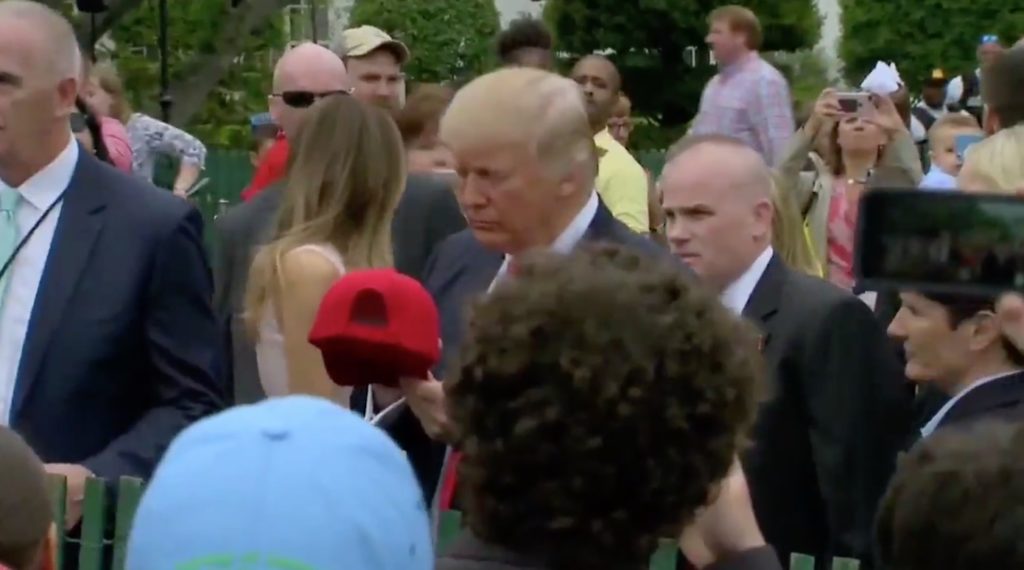 Donald Trump returned to the White House today for the traditional Easter Egg Roll, but he might have done better for himself if he’d remained at Mar-a-Lago instead. Trump forgot to put his hand over his heart during the National Anthem, until his wife prompted him. But then things got even worse when a kid in the crowd asked Trump to autograph his hat.

Video footage posted by Politico reveals that a kid said “Will you sign my hat?” to Donald Trump, who stopped and amicably signed the hat. But then instead of handing the hat back to the kid, Trump flung the hat randomly into the crowd. The kid yelled out “No!” and other kids joined him in yelling the same. Then Trump signed another kid’s hat – only to fling it into the crowd as well. After throwing the second hat, Trump inexplicably said “Whose hat?”

Did Trump think he was being funny by trying to bait the crowd of kids into fighting over hats that he knew belonged to specific kids? Did he have a mental lapse, forgetting that specific kids had just handed these hats to him seconds earlier? That’s not entirely clear. But one thing is for sure: Donald Trump’s week is off to a strange start, even by his standards. Watch the video of Trump taking kids’ hats from them and flinging them into the crowd:

A kid asks Trump to sign his hat at the White House Easter Egg Roll. The president signs … and then tosses the hat into the crowd. pic.twitter.com/7ExdhpO97H