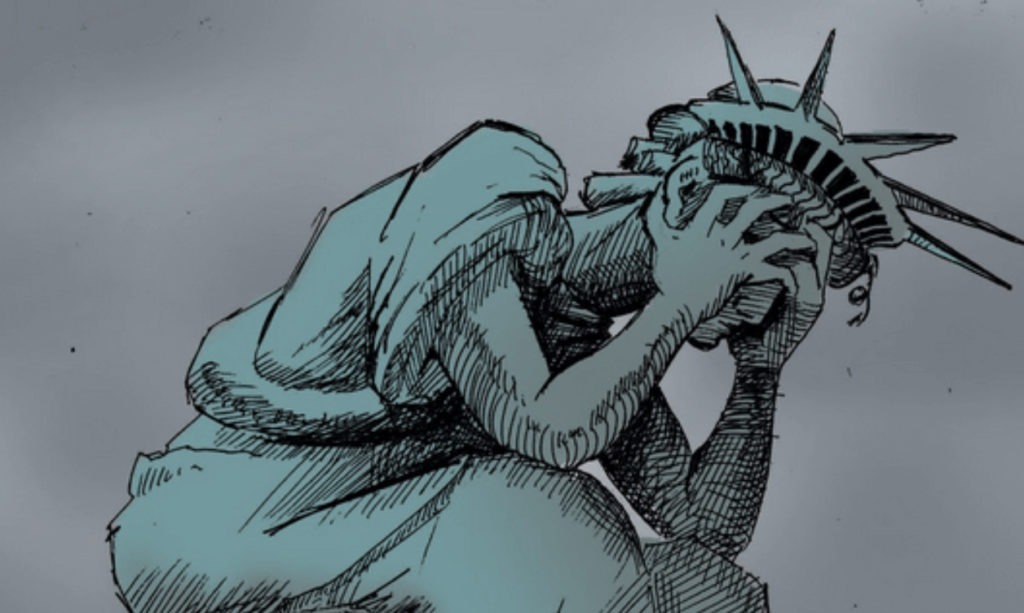 
It has just been reported that the Statue of Liberty, after dropping her torch, has been spotted on a freighter headed for Lithuania! Although U.S. Customs and ICE officials tried to stop her from leaving the country she showed them her visa to Lithuania where she has applied for asylum to be rescued from Donald Trump, Mike Pence, Steve Bannon, Gen.Michael Flynn, Paul Ryan, Sean Spicer and Kellyanne Conway.

Since Donald Trump metaphorically had these words chiseled off the plaque at the bottom of the Statue of Liberty “Give me your tired, your poor, your huddled masses yearning to breathe free, the wretched refuse of your teeming shore. Send these, the homeless, tempest-tossed to me, I lift my lamp beside the golden door,” Lady Liberty has wept into her hands as she turned her back on Ellis Island and boarded the S.S. Lithuania “Visa to Freedom.”

As I wrote in an article on May 6th, the head of Chechnya noted that in his region “there has never been a phenomenon called non-traditional orientation: the people have lived for thousands of years by other rules, which are prescribed by the Most High, are dictated by morals and ethics of relations between people. We have never had them among the Chechens. Unless we are talking about those who, not being a Chechen, call themselves so that they can get to the West.” According to Kadyrov, local authorities called for reports of harassment or violence, if any, but so far no statements have been received in this regard (link). Of course Kadyrov and his henchmen will never admit to anyone coming forward to report the abuse of gay men in Chechnya because had they come forward they would now be in one of the concentration camps or killed by their families.

On May 10th, Sarah Huckabee Sanders was asked if the President had been made aware of the situation with gay men in Chechnya being abused, taken to concentration camps and killed. Her response was “I mean a lot of times there are parts of the conversation that aren’t specifically included in a readout, but I’m not aware. I have not had that conversation. So I do not know, I was not part of that meeting. So I cannot speak to every detail and I would have to refer you to the readout on the specifics of what I know was discussed.” When she was asked if Trump has been briefed on the issue generally, Sanders response was “That is something I would have to get back to you on. I am not 100 percent sure.”

Later that day a response from Michael Anton, a White House National Security Council spokesperson, said via email to the Washington Blade the issue of anti-gay abuses in Chechnya “did not come up in the meetings” with Lavrov (link).

Russia LGBT Network spokesperson Svetlana Zakharova said the organization has had a difficult time securing visas from countries that would offer safe haven to these gay men. While Zakharova didn’t want to point a finger at the countries making it hard for these individuals to find safe passage, she did say that “we were informed that the US is not going to issue visas for people from Chechnya.”
The State Department refused to comment, saying, “As visa records are confidential under U.S. law, we are unable to discuss individual cases.” (link)

As reported by Russia’s Interfax news agency, Lithuania’s foreign minister, Linas Linkevičius, said that two gay men traveled to Lithuania to escape abuse, entrapment and death in Russia. Linkevičius said his government “issued visas to two people from Chechnya who were persecuted because of their sexual orientation.” Lithuania is among the first EU nations to accept gay asylum seekers from Russia (link).

Even though Donald Trump’s Immigration Ban has been blocked by the Federal Courts it did not keep Trump from issuing visas to these men fleeing for their lives from Chechnya. Donald Trump just chooses to ignore this LGBTQ Human Rights crisis and allow gay men to be murdered.

You might be able to catch a glimpse of Lady Liberty as she rides the waves to Lithuania, maybe even slowly lifting her torch once again for a country that takes in not only the tired, poor, and huddled masses yearning to breathe free. But also the homeless, tempest tossed and now gay men being tortured and murdered in a country that denies their existence.