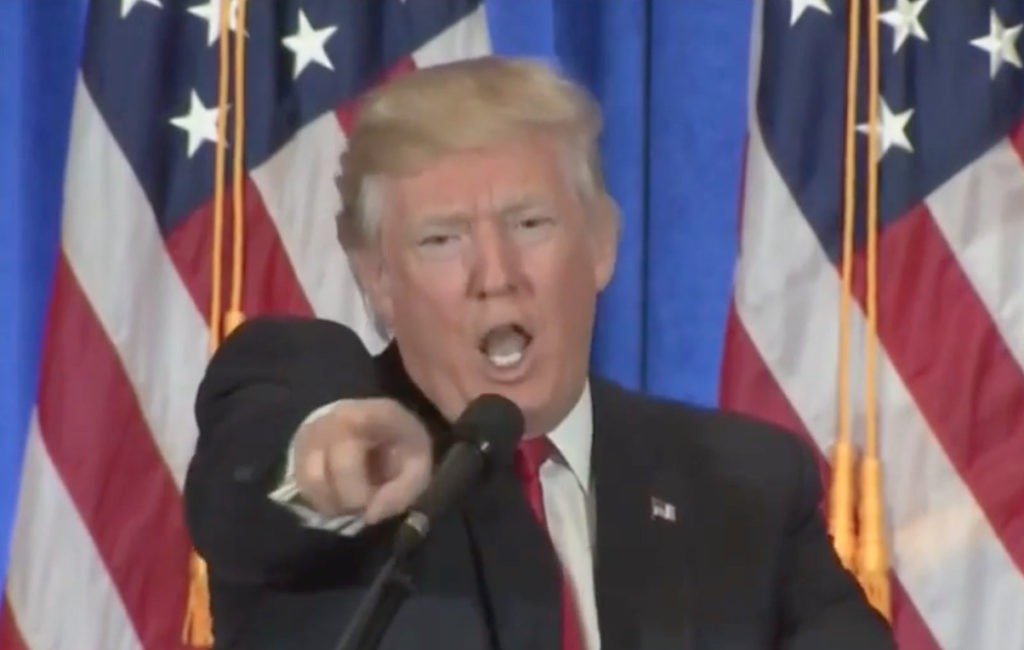 The tables have finally turned. Donald Trump has spent the entirety of his time in office falsely accusing various major news outlets of being “fake news” simply because he didn’t like the real stories they were reporting. But when a weakened and tailspinning Trump tried to invoke the phrase today to fend off a question about his own white supremacist supporters, a CNN reporter threw the term right back in his face.

Trump gave yet another weak and tepid response on Monday to the deadly terrorist attack in Charlottesville, in which he failed to call it terrorism while falsely insisting that his white supremacist fans were only one side of the violence. This led CNN’s Jim Acosta to ask Trump the following question: “Can you explain why you did not condemn those hate groups by name over the weekend?” Trump responded by falsely claiming that he had done so. Acosta, undeterred, asked “Why are we not having a press conference today?” Trump responded by lying again, insisting that he’d just had a press conference when it wasn’t really one.

Donald Trump then said to Acosta, “I like real news. You’re fake news.” This was a direct callback to Trump’s pre-inauguration press conference in January, when he made a point of attacking the CNN reporter in the room and accusing the network of being “fake news.” But this time, with Trump on his heels, Acosta wasn’t having it. He fired back: “Haven’t you spread a lot of fake news yourself?” Watch the video of the exchange below:

And so now we’ve reached the point where the mainstream media is actively fighting back against Trump’s lying and bullying tactics by throwing his favorite term “fake news” back into his face. All Trump could do was walk away without answering the question, which has become his go-to move since the Charlottesville terrorist attack sent him into a defensive political tailspin. Jim Acosta’s boldness today in the name of truth may inspire others in the media to begin covering Trump just as directly and bluntly.

← In his latest speech, Donald Trump swings weakly and misses on white supremacists yet againEven as Donald Trump flounders over Charlottesville, he gets hit with a major new Trump-Russia bombshell →
Posting....
Scroll To Top