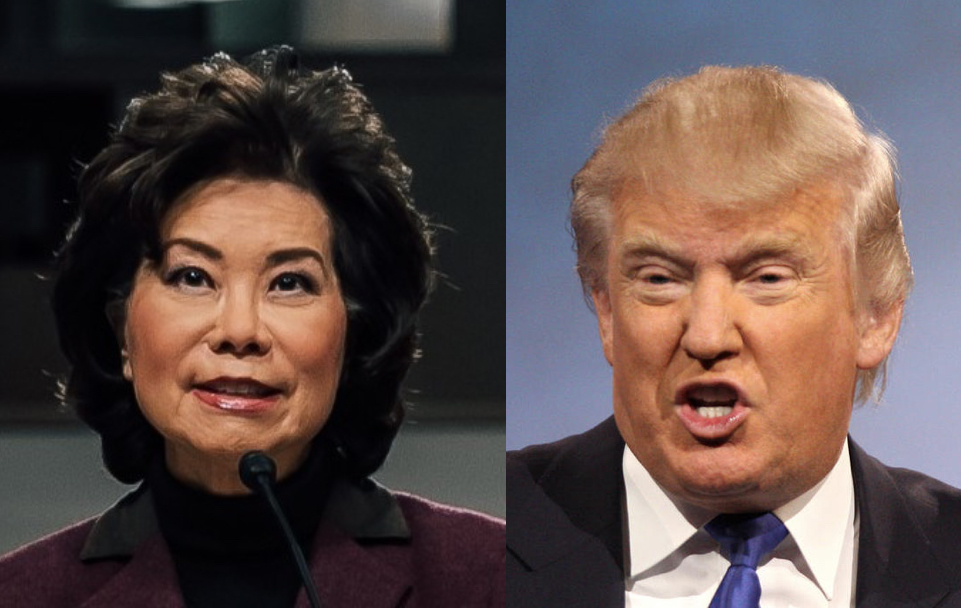 Last week Palmer Report brought you the story of how Donald Trump’s Secretary of Transportation Elaine Chao had been caught retaining stock ownership in a company that she had the power to give government business to (link). It suggested that Chao, whose family business faced a major previous scandal, may not be doing her job on the up-and-up. Sure enough, now Chao has been caught up in the flight scandal that’s enveloped several members of Trump’s cabinet.

Chao is now revealed to have taken taxpayer-funded government flights at least seven times this year, according to a new report from The Hill (link). She’s already providing a series of excuses as to how other travel options weren’t available at the time, and we’ll see whether those excuses ultimately turn out to be legitimate or not. In the meantime, it’s important to note the role that Chao has played in Donald Trump’s Russia scandal with respect to her husband, Senate Majority Leader Mitch McConnell.

Elaine Chao previously served as George W. Bush’s Secretary of Labor, and she is objectively qualified for her current job of Secretary of Transportation (in fact she’s one of the very few cabinet members Trump picked who does have the proper skills and experience for her position). But because of her family business scandal, which involved drug shipments, she was never going to hold another high level government position. When Donald Trump picked her for his cabinet, it was widely questioned whether he may have done so as part of some deal with Mitch McConnell.

It was later revealed that McConnell had indeed worked hard during the election to prevent the American public from learning that the Russian government was meddling in the election on Trump’s behalf. Trump appears to have hired Chao to return the favor, making her complicit. Her apparent corruption, in terms of excessive travel expenses and stock ownership conflicts, must be viewed through the lens of her apparent role in the Trump-Russia scandal.