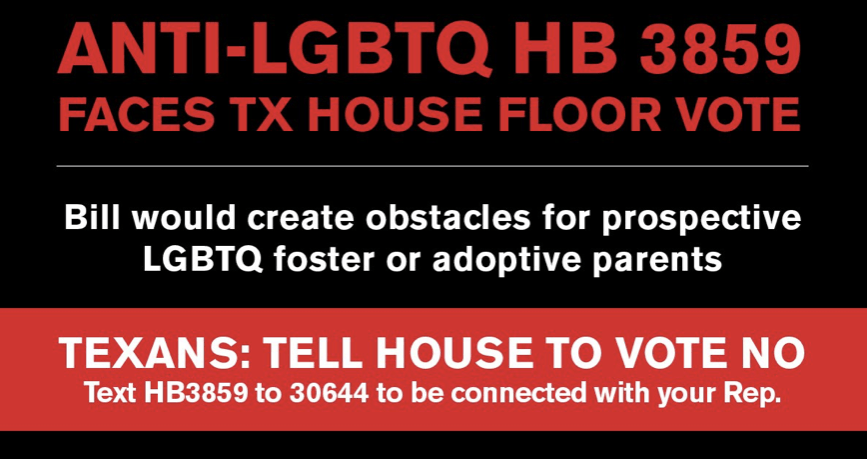 
So called “Religious Liberty” laws are at the forefront of the 85th legislative session in Texas. This past Saturday the Texas House was supposed to vote on HB 3859 (link). Because of the quantity of bills being discussed this session we have luckily been handed more time to have people contact their state representative to oppose this bill.

HB 3859 is a “Religious Liberty” bill. Parents seeking to adopt children in Texas could soon be rejected by state-funded or private agencies with religious objections to them being Muslim, Jewish, LGBTQ, Single men or women, interfaith married couples, mixed race couples and others under a proposal in the Republican majority led legislature.

State Rep. James Frank, the bill’s author, said it’s designed to address the state’s foster care crisis by making “reasonable accommodations so everyone can participate in the system. Everyone is welcome. But you don’t have to think alike to participate. My guess is if you have an LGBT agency they’re going to pick an LGBT family, and if you have a Baptist agency they may be more likely to pick a Baptist family. They’re free to do that and should be free to do that.”said Frank, a Republican from Wichita Falls which is near the Texas border with Oklahoma.” (link)

Typical of Republican politicians nationally Rep. Frank is excellent in “Doublespeak”. Republicans have this down to a science. We see this daily on all the major news channels and in articles in the online media websites and newspapers. I was never really that good at math but here is my equation for Double Speak, GOP + Republicans = Double Speak. It really is apparent when you read the definition of double speak on Wikipedia.

Doublespeak is language that deliberately obscures, disguises, distorts, or reverses the meaning of words. Doublespeak may take the form of euphemisms (“downsizing” for layoffs, “servicing the target” for bombing), in which case it is primarily meant to make the truth sound more palatable. It may also refer to intentional ambiguity in language or to actual inversions of meaning. In such cases, doublespeak disguises the nature of the truth. Doublespeak is most closely associated with political language (link).

This should sound very familiar as Republicans use doublespeak when trying to sell AHCA-Trumpcare to the American people. Republicans say all Americans with pre-existing conditions will be covered. As a former member of the Texas High Risk Insurance Pool I can tell you premiums run 3 to 4 times higher than those in the regular insurance market.They don’t tell you all of the conditions like having a c-section, being born with a heart condition or any other birth defect, having diabetes, cancer, HIV-AIDS, mental illness, drug addiction and so many more are pre-existing. The list just goes on and on, almost to the point of having a hang nail being a pre-existing condition.

Senior legislative counsel for the Human Rights Campaign, Catherine Oakley was quoted as saying “This (HB 3859) would allow adoption agencies to turn away qualified, loving parents who are perhaps perfect in every way because the agency has a difference in religious belief. This goes against the best interest of the child. As a governmental entity, Texas is bound to treat people equally under the law. This is a violation of equal protection under the law.”

But even worse to me, as a gay man, they could also force children in the foster care system to live by their faith-based demands. This would allow child welfare organizations to send LGBT kids to conversion therapy treatment centers. As most people know this is a treatment designed to turn anyone considered LGBTQ straight! This has not only been debunked but also has been documented and uses starvation, physical abuse, mental and emotional abuse as tools to achieve their goal. Many times conversion therapy can actually lead a teenager to commit suicide. Also, under this law, welfare and adoption agencies could deny young people contraception and abortions.

We still face between 15 to 20 more “religious liberty” bills in Texas. These are actually “legalized discrimination” against LGBTQ, Muslim, Jews, mixed race couples, races other than white and so many more. We must speak out and fight back!

I ask myself daily if Donald Trump is watching what bills become law in Texas as he decides to sign more executive orders based on “religious liberty”, making the right to discriminate legal. This is why no matter what state you live in you must speak out now. This is a national epidemic!

If you live in Texas call your local representative every day starting now and say NO to HB 3859 and all other “Religious Exemption” bills. You can find your representative on the Texas state website “Who Represents Me?” (link)