In a sign of just how eager the Russian state-controlled media is to prop up Donald Trump with propaganda stories, and just how much difficulty it seems to be having in doing so, the news outlet “Russia Today” changed one of its articles to say the complete opposite after Trump’s camp denied that the story was true.

The strange incident began when Russia Today published an article on Saturday evening with the title “Trump plans to hold summit with Putin in Reykjavik as his first presidential foreign trip” which went on to discuss in detail the supposed upcoming meeting between the two leaders in Iceland. But after Trump Press Secretary Sean Spicer tweeted that the claims of the summit were “100% false,” that particular article was immediately rewritten with a new headline saying “Trump press sec denies report of planned meeting with Putin in Reykjavik.” 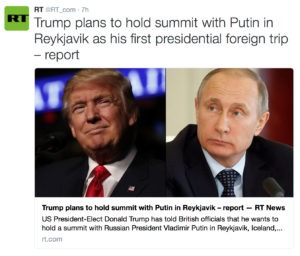 The above image is how Russia Today initially presented its article. But if you visit the article at that same link in its current form, it now reads the complete opposite.

It’s not unheard of for media outlets to update their articles, and even revise their headlines, when new information subsequently comes along. But what stands out here is just how swiftly Russia Today moved to scrub the contents of its own article in favor of reporting the complete opposite, without offering any acknowledgement that the swap-out had taken place beyond simply including the time that it was edited.

Moreover, with state-controlled media in Russia now seemingly going out of its way to make Donald Trump look good, this incident raises questions as to why Russia Today published the original version of the story to begin with. It suggests there was a planned summit, and that Trump only claimed there wasn’t one after he found himself being widely criticized for meeting with Russia before having a customary meeting with Great Britain.