Was it an accident, or was it a not to subtle cry for help on the part of a “First Lady” who has already been trying to signal there’s a problem by living two hundred miles away from her husband? After a political pundit tweeted a witty joke about how much Melania Trump hates Donald Trump, he got a shock when his tweet was “liked” by Melania Trump herself.

The incident began when pundit Andy Ostroy tweeted “Seems the only #Wall @realDonaldTrump’s built is the one between him and FLOTUS Melania Trump” along with the now famous animated GIF of Melania’s pained grimace behind Donald’s back (link). Shortly thereafter, Ostroy received a Twitter notification telling him that “Melania Trump” had liked his tweet. This led him to question whether it was really her.

But then one of his followers @rarmenta_ posted a screen capture confirming that it was in fact the verified “Melania Trump” account (notice the blue checkmark) which liked Ostroy’s tweet: 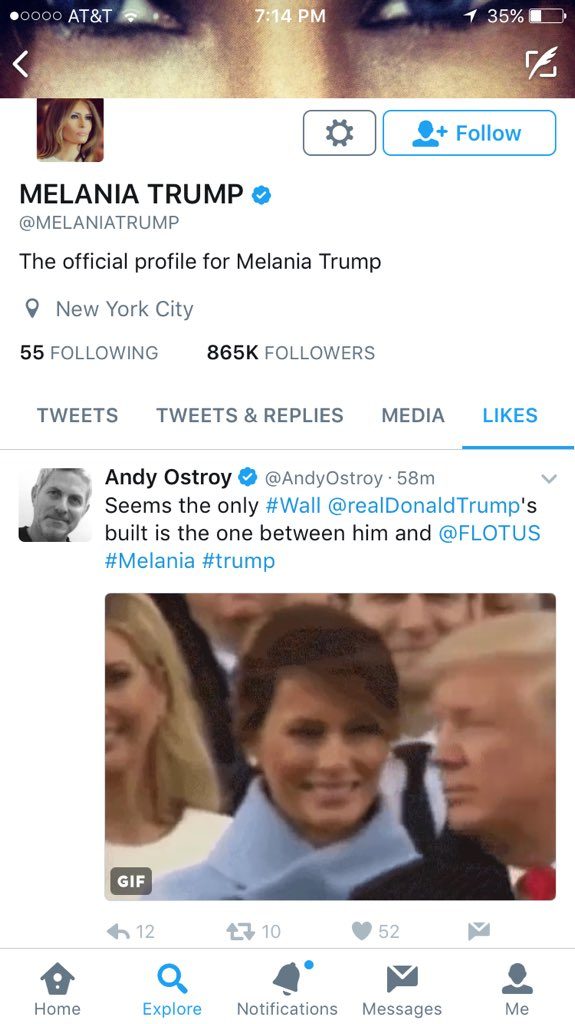 So unless someone faked the above screen capture, the real Melania Trump (or someone using her real account) really did “like” a tweet about how much she hates her husband. But at this point the “like” is not listed on her page, so if she really did like it, then she must have already gone back and unliked it after people began taking about it. It’s also worth noting that this came from her @MelaniaTrump account, which has otherwise been dormant for months; she’s since begun tweeting from @FLOTUS exclusively.

So is Melania suddenly using her old personal account to send a cry for help? If not, why would she have logged back into her old Twitter account at all? Help fund Palmer Report