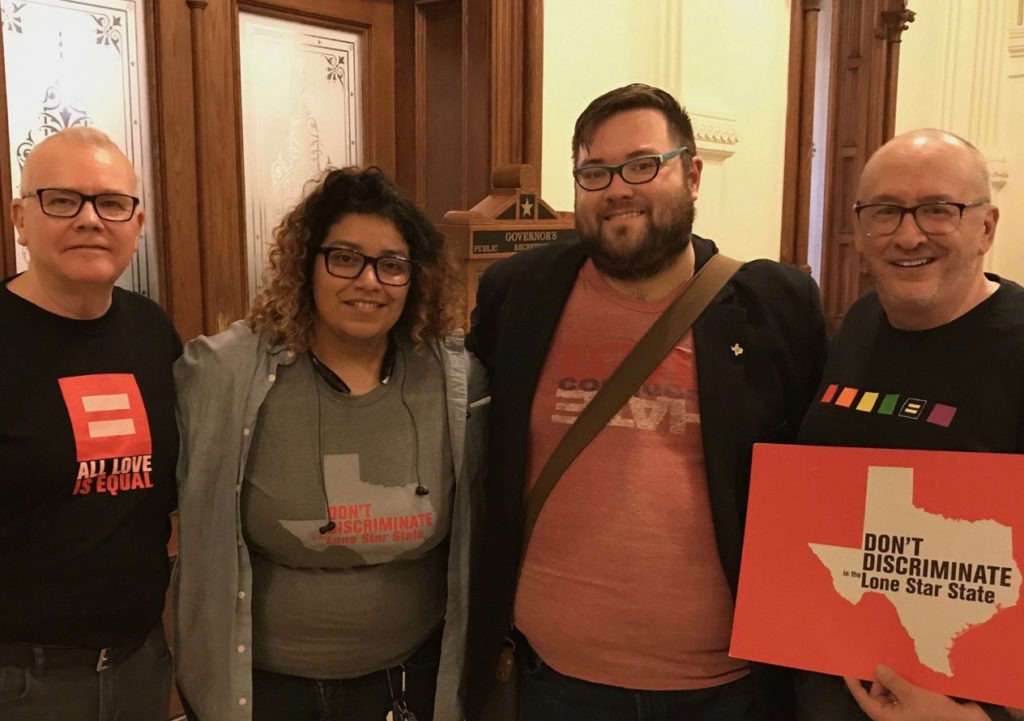 
I’m going to tell you about our day at the Texas State Capitol yesterday and share information about the Lt. Gov. Dan Patrick that so few Texans know. My husband and I headed to the state capitol in Austin yesterday to meet up with fellow volunteers of the Human Rights Campaign of Austin, Equality Texas and the Texas Freedom Network to deliver 33,000 signatures, texts, letters and e-mail messages opposing Anti-LGBTQ legislation in Texas. We did not know that we would be met by local ABC, CBS and NBC affiliates but also the Time-Warner-Spectrum Cable News (link) channels there to cover our Texas Equality Coalition.

The event was also covered by The Dallas Morning News, Austin Statesman and the San Antonio Express News. We then headed to deliver the boxes of messages and list of names from Texas LGBTQ supporters only to find the Governors office had closed his doors as we approached even though we could see and hear activity behind the frosted glass doors. The media that had been covering us went in through a side door to cover whatever activity was going on inside the office with cameras flashing away. At that point we broke out in chants led by Sissi Yado, the HRC Austin field operator, supporting the Transgender and LGBTQ Community. Our voices were heard inside Gov. Abbott’s office, even if the doors to the Governors reception room had been bolted shut on our approach.

We then went in small groups to Texas Republican State senators and congressmen’s offices throughout the capitol to deliver the names of 33,000 Texans asking that they take their constituents opinions into consideration and vote no on the “Bathroom Bill” or any other anti-LGBTQ legislation.
The only thing that the Texas legislature has to do during this 85th session is to pass a state budget for the next two years. This was achieved Saturday evening when both houses approved a $217 billion budget that would increase funding for the state’s child welfare agency, add additional state troopers on the Texas-Mexico border but fail to achieve serious reforms that the state’s school finance system was in desperate need of.

So what will happen between now and midnight Monday, Memorial Day? The 85th session ends on Monday at midnight and Lt. Gov. Dan Patrick continues his threat to push Governor Abbott to call a special session until Patrick’s Religious Right base wins the “Bathroom Bill” that they demand. Patrick even went so far tonight as to say that Republican Speaker Straus was pushing a “Left Wing Agenda.” Seriously? What we may be seeing coming into play now is Patrick’s manic depressive issues that were exposed during his 2013-2014 run against David Dewhurst for Lt. Governor. Patrick did win that election, while trying to hide his mental issues from the public.

After the election David Jennings, writer for TexasGOPVote.com (link), felt the truth needed to come out about Dan Patrick’s lies to the citizens of Texas. In an article written on May 27, 2014, David Jennings writes:

Dan Patrick’s lies about his condition – Here is what Dan’s campaign said about the two hospitalizations that he had in the 1980’s, “Nearly 30 years ago, Senator Patrick sought medical attention to help him cope with mild depression and exhaustion. Under the care of a medical doctor, he voluntarily admitted himself for treatment and spent a short time in the hospital. He has not required additional treatment or medication for nearly 30 years.”

Obviously, that is a lie. We now know that Dan twice attempted suicide “ that is far more than mild depression and exhaustion”. We know that in his 1982 stay at Memorial City, he attempted suicide after entering the hospital, he attempted to slice his wrists, was found with razor blades and a dinner knife, jumped out of a window, and required a 24 hour a day sitter. The medical record of this stay is troubling because Dr. Kramer’s consult was written on the day of discharge “obviously a consult must be done on entry to the hospital in order to determine a course of treatment. His original diagnosis of acute exhaustion was scratched out (there is no diagnosis of acute exhaustion) and replaced by acute anxiety disorder (suicide is not typically a symptom of anxiety). Kramers daily notes say that the patient was doing well but the daily records indicate that Patrick was being treated as a severely depressed patient and was being given doses of medicine twice the normal prescription levels. And exactly how can a patient that did all of these things while in the hospital be described as doing well?

In his 1986 stay and a second suicide attempt, Dr. Kramer’s consult was once again on the day of discharge. Worse, Dr. Kramer listed this as a single episode of depression when in fact he knew it wasn’t. Why was Kramer being so protective of this patient? Was it Patrick’s celebrity status in Houston at the time? It is also important to note that Patrick checked out early and was not cooperative with the attending physician and therapist. And once again, Dan lied by saying that he was only coping with mild depression and exhaustion.

“Of course, all of that was roughly thirty years ago and Dan claims to have been cured and that he has not been treated for depression since. Both doctors were skeptical of his claims. Dr. Moldovan told me that the true diagnosis was bipolar disorder, so Dan could in fact say that he hasn’t been treated for depression if he were being treated for bipolar disorder. Perhaps but I was still skeptical and wondered if there were episodes more recent than decades ago that could be indicative of continued manic behavior, specifically during Dan’s time as a state senator. Here is a short list of episodes that have happened while Dan was in the Senate: 1. During the 2011 session Patrick was carrying the sonogram bill and got into argument with House Sonogram sponsor Sid Miller. Patrick blew his cork one day and walked over to House where he threatened, in front of House members, to beat up Sid Miller. The House then got mad at Patrick; he went to see Straus and they had an argument and Straus told Patrick to stay away from the House.” (link)

This is just a small section of the article. Please go to the link listed above to read the complete article which has links to four separate documents verifying all of the information on Patrick’s psychiatric medical records. This article shares information about the real Dan Patrick that so few Texans know. What we learn in the end is that like Trump, Patrick has no problem with lying to achieve his Right Wing Conservative Evangelical Christian Agenda and Anti-Immigrant policies that he promoted on his radio talk show “Dan Patrick and Friends”.

Speaker Straus, who has always said, “This is an Answer Looking for a Problem.” has not only the support of the LGBTQ community and ACLU of Texas  but also all major business organizations and major city managers of Dallas, El Paso, San Antonio, Houston and Austin. Straus knows that this will hurt the economy of Texas not only in tourism but in business and tech growth. IBM, a large employer in Texas, came out last Friday asking that no “Bathroom Bill” be passed. Austin has just been named the new number one city in the world for tech (link).

I’ll be keeping you informed over the next 48 hours. Speaker Straus said the House will not appoint members to negotiate with the Senate on its proposed compromise on a “Bathroom Bill.” The House had tried to offer what they thought was a compromise when they attached an amendment to SB 2078 and the Senate turned it down. Now that the budget has been finalized and sent to Governor Abbott’s desk it is a “wait and see”situation. Will Lt. Gov. Dan Patrick continue with his abusive rhetoric attacking Straus in the media and trying to bully his way into a special session? I have faith in Speaker Straus standing up to Patrick’s harassing intimidation tactics. If for any reason Patrick convinces Gov. Abbott to call a special session my money is on Republican Speaker Joe Straus from San Antonio to do not only what’s in the best interest of the State of Texas but also stand up for the rights of the LGBTQ community and protect All Texans.