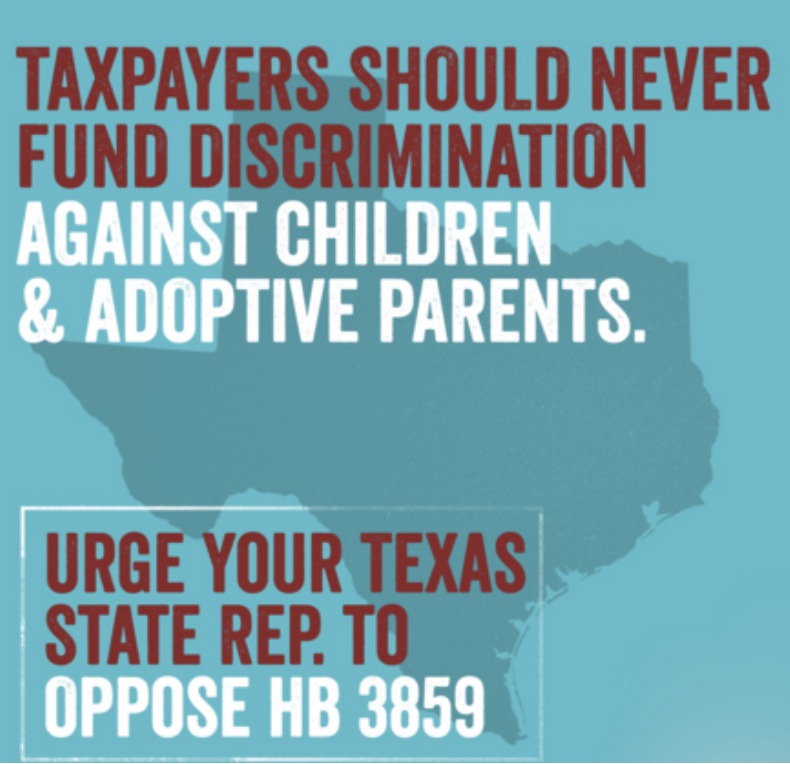 
With the signing of SB4 the “Sanctuary City-Show Me Your Papers” bill on Sunday, May 7th, Texas isn’t just on its way to sending the message that you can be racially profiled. Now it’s going to allow religious discrimination as well.

On Wednesday, May 10th, the Texas House passed HB 3859 with a vote of 94 to 51. HB 3859 (link) would allow Texas’ adoption and foster care agencies to claim religious objection to certain groups, without fear of losing state funding. The bill, adulated by supporters as a victory for religious independence and freedom, could restrict adoption and fostering opportunities for LGBTQ, single men and women, or non-Christian parents, and could allow child welfare services to send foster children to anti-gay “conversion therapy. This bill would actually make Christianity the “State Religion” as seen by Governor Abbott and so many religious right Republicans.

Texas partners with hundreds of private adoption and foster agencies, some who receive state funding. The bill would allow these agencies to claim religious exemption (Christian) to working with LGBTQ parents or parents of another religion (which is religious discrimination) without fear of losing their funding. Making this legal would also make these groups or organizations exempt from being sued for discrimination.

Catherine Oakley, senior legislative counsel for the Human Rights Campaign stated “The bill would allow discrimination on the basis of religious belief. An organization that receives taxpayer funds and provides services on behalf of taxpayers of Texas can turn potential parents away because those parents have religious disagreement with them.”

This bill would also allow child welfare organizations to regulate foster care that is in line with their religious beliefs. If teenagers in foster care were sexually active care providers could “decline to provide, facilitate, or refer a person for abortions, contraceptives, or drugs, devices, or services that are potentially abortion-inducing.” So, a care provider could claim religious exemption and not provide condoms or birth control.

Foster care groups could also require that children in their care follow their religious beliefs and law. As recently aired in a “20 20” episode conversion therapy is outdated and actually is no longer recognized as a form of treatment for LGBTQ youth.

“In 1975 the American Psychological Association said, “Homosexuality per se implies no impairment in judgment, stability, reliability or general social and vocational capabilities; further, the American Psychological Association urges all mental health professionals to take the lead in removing the stigma of mental illness that has long been associated with homosexual orientations”.

“And in 1993 the American Academy of Pediatrics denounced conversion therapy, saying, “Therapy directed at specifically changing sexual orientation is contraindicated, since it can provoke guilt and anxiety while having little or no potential for achieving changes in orientation.” in some religious organizations could mean sending LGBT youth to so-called “conversion therapy,” a dangerous treatment that claims to change a person’s sexual orientation. Conversion therapy has been broadly condemned as psychologically damaging, particularly for youth, and has been outlawed in a number of states.” (link)

In the case of transgender children, who might need counseling as they go through this process, they could be denied access by the agencies involved.

This will go on to the Texas Senate this week to be voted on before this session ends. I can guaranty you they will pass this bill and then it will be placed on Governor Abbott’s desk. He will once again “Warm up his pen” in anticipation of this bill so he can sign it into law.

What this means is that Texas is not only a “Show Me Your Papers” state but also will be known as “The State That Discriminates”. These religious liberty bills are done for one reason only. They are being done to allow legal discrimination by Christian who work in child welfare services or adoption agencies without the fear of being sued.

As Texas passes more and more of these religious exemption laws it will do two things. First, it will bring more lawsuits by the ACLU to fight and defeat these discriminatory laws. It will also deter any companies looking to move their businesses to Texas or hold major conventions to choose other states where discrimination is not there state motto. Texas will no longer be known as “The Lone Star State” but as “The State That Discriminates”.