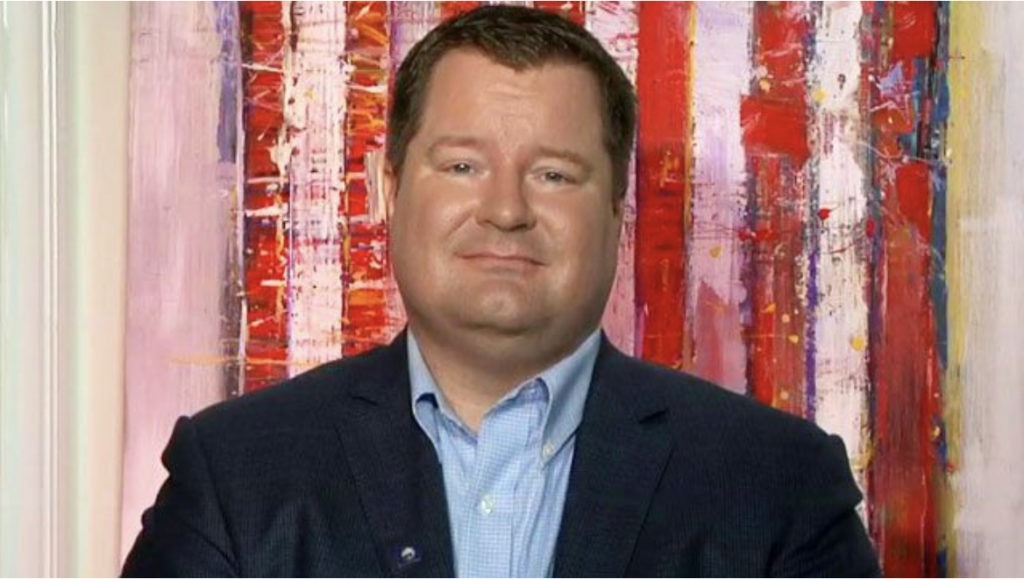 
I was going to take a day off from writing. I am always driven to write an article when a person or situation I have compassion about is attacked. When a person condemns my community or friends I address it. Today is one of those days. I started to just tweet an article about Erickson, who is a regular guest on Fox News. When I did a little more research I knew I must sit down immediately for my own peace of mind and report on this horrendous person who displays the persona of white male privilege that so many conservative hypocrites on Fox News bolster.

This recent controversy came about when on April 20, U.S. Sen. Mike Enzi (R-Wyoming) visited Greybull High School for a scheduled Q&A with students. “For the last question from students, sophomore Bailee Foster asked Sen. Enzi about the LGBTQ community — specifically what he was doing to help Wyoming live up to its nickname as The Equality State. “That’s one of the problems we have in this country; thinking that everything could be done by law,” he said. “What we need to have is a little civility between people.” Enzi went on to say that he enjoys Wyoming because “you can be just about anything you want to be, as long as you don’t push it in somebody’s face” (link). The remainder of his answer is in the section of Erickson’s blog where he demeans the LGBTQ Community.

Many articles have been written about Enzi but even more horrendous are the words of Erickson. In “The Resurgent,” Erickson’s blog, on April 28th he wrote an entry titled: You Will Get Punched and Others Have Rights Too. “You know, I’m really damn tired of all the people running around making other people extremely uncomfortable then screaming about their rights and privileges when called out. If you want to go around making people uncomfortable, you’ve got the problem, not the rest of us.f”

Erickson stated, “It all starts with Mike Enzi who has enraged the BLT&GQ community (Erickson’s insult to LGBTQ) by declaring a simple fact (link). If a guy walks into a bar in Wyoming, he’s probably going to get punched. Enzi said the person would deserve it, which he apologized for, and the guy would not deserve it. But it is probably going to happen and yes, the dude wearing the tutu shoulders some of the responsibility. He should have known better. And spare me the tirade about Matthew Shepard.” (link)

First, Erickson’s homophobia is rampant throughout his blog. Starting with his defense of Enzi’s answer to the students. Also, Erickson leaves out the part where Enzi says “I know a guy who wears a tutu and goes to bars on Friday night and is always surprised that he gets in fights. Well, he kind of asks for it.”

Secondly, Erickson obviously loves to feed his homophobic followers with lines like “BLT&GQ community”. This is just typical of the right wing conservative gruel Erickson’s readers thrive on.

Thirdly, Erickson knows his readers will lap up the remainder of his blog with the line “And spare me the tirade about Matthew Shepard” (link).

Erickson writes this blog to enforce the hatred, bigotry, xenophobia and homophobia perpetuated by the religious right. In attacking Matthew Shepard and the horrendous tragedy of his death in Wyoming he continues to push his heterosexual white male right wing agenda while insulting all the victims who have lost their lives to hate crimes.

Erickson ends his article with “People, I couldn’t care less that some of you are offended by this. But the in your face desires of people…..to make everyone else uncomfortable as they seize on “rights” is an unnecessary afront to common decency where good mannered people try to avoid making everyone else uncomfortable and putting others in awkward situations….but stop your bitching that others have to go along with your ‘rights.’ Get over yourself” (link)./ I don’t think Erickson even has a clue what “good mannered people” means.

If people on the far right are uncomfortable with anyone else that is of a different race, religion or sexual orientation/gender identity from them then they need to get over it.

The LGBTQ community has fought and is still fighting for equal rights under the U.S. Constitution. This will not happen under the current administration, but come 2018 we will start taking back a more just and fair America. No, it won’t happen overnight but I don’t believe the hatred generated by all of the Erick Ericksons of the world will continue. Americans are people of compassion and acceptance. The world is watching and America should be embarrassed by all of the Erick Ericksons.

← The Feds just let two Russian hackers off the hook; they’ve clearly flipped on someone importantPresident Obama may have been baiting Donald Trump by demoting DOJ’s Dana Boente →