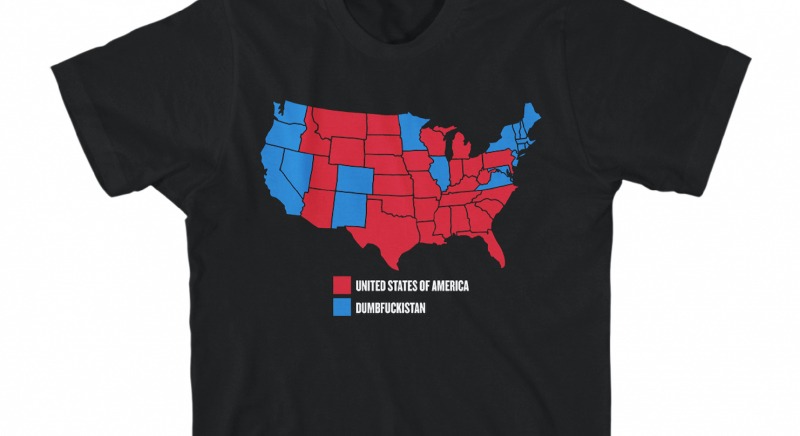 Even as most famous musicians are running away from Donald Trump so fast that he can’t find any bona fide stars to perform at his inauguration, one musician is openly embracing him. Rocker / rapper / whatever-he-is Kid Rock is now selling merchandise at his concerts which promote Trump in a divisive and offensive manner. But that’s caused a record label involved with the tour to lash out at him in defiant fashion.

Kid Rock is selling t-shirts at his merch booth on the Northern Invasion tour which, among other things, refer to the states that voted against Donald Trump as “Dumbfuckistan.” His own record label, Warner Bros, has not taken a public position on the offensive merchandise. But another artist sharing the bill with Kid Rock on the Northern Invasion tour, a band called Bad Omens, is signed to Sumerian Records – which is reading him the riot act over the matter.

Sumerian Records, wanting to make clear that its own band has nothing to do with the offensive Kid Rock merch booth, posted the following to Instagram:

“While we are excited to have @badomensofficial on @northerninvasion we would like to remind you that @kidrock is currently selling and promoting this tshirt. This is the epitome of closed-minded bullshit that is the opposite of rock & roll and everything our music stands against. Diversity is the beauty of life. This post is not about who you voted for. It’s about accepting each other knowing there will be different opinions rather than generalizing and bashing millons of fellow Americans. We love California and we love Texas too. This type of hate should not be tolerated in our community. He should be playing shows with Ted Nugent, not Soundgarden and Opeth.”

Thus far Kid Rock has not offered any public response to Sumerian Records’ public takedown of him and his pro-Trump merchandise. Meanwhile, the official Warner Bros merch site for Kid Rock is still selling the offensive “Dumbfuckistan” t-shirts. With all the outrage toward the offensive Kid Rock merch, it’s not clear why that outrage hasn’t yet been focused on Warner for selling it online.