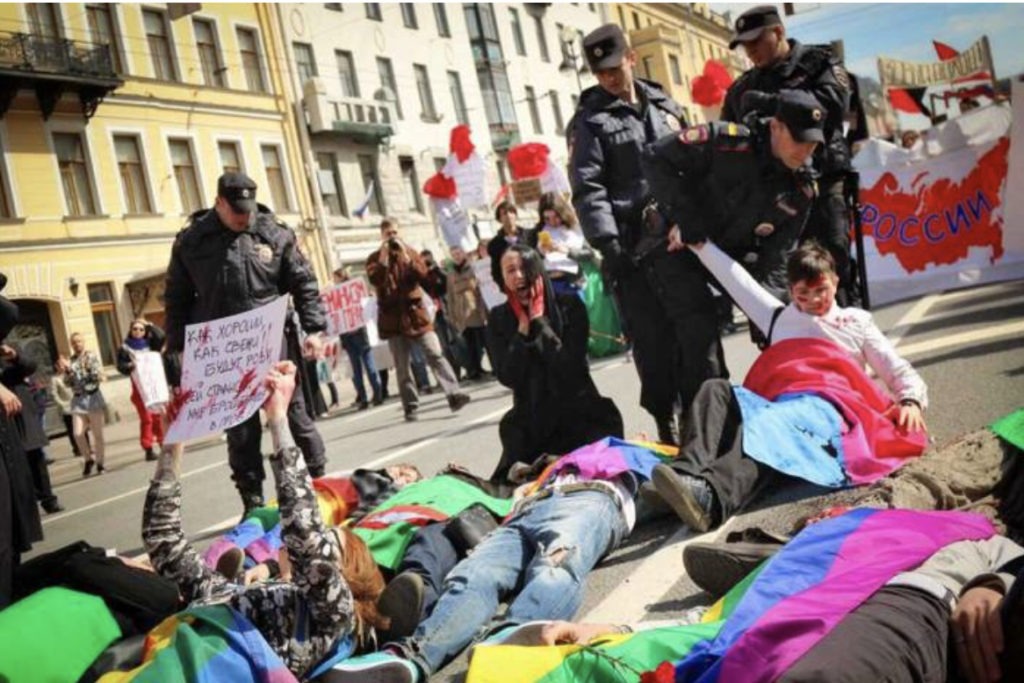 Today, on May Day in St.Petersburg Russia LGBTQ staged a “lie down” protest on Nevsky Prospect, the city’s main boulevard. Chechen mothers mourned as they sprinkled their children with dirt implying the deaths and burials of their gay sons. Lying on the ground, the bodies of the LGBT protesters were covered with Chechen and Rainbow flags. The performance was meant to express solidarity with the people of the Republic of Chechnya as well as draw attention to the horrifying events occurring there daily with no end in sight.

The protestors were detained and taken to the 43rd police precinct in St.Petersburg. One man who came out bearing a sign that read, “Putin, go away. Putin is evil” was detained also. It’s forbidden to say that now in Russia. This protest was done to support support the LGBTQ people in Chechnya to keep the events happening there in the mainstream media and as a reminder to the citizens of Russia.

This has been going on in Chechnya, which is still considered part of Russia, since early 2017.There has been an unknown number of illegal arrests, detentions and murders of gay men including men only suspected of being gay. There have been hundreds of men taken to these concentration camps in Chechnya and it is estimated that dozens have been murdered as of today. Even as officials still deny that genocide is taking place, local officials basically say that if these atrocities occur it’s because of their medieval “ethnic traditions” and “Muslim values.”

These attacks and murders of the LGBTQ in Chechnya have been a common day occurrence for quite some time. Chechnya has long been filled with heinous violence, corruption, torture and inevitably murder. In Chechnya local and federal authorities are to blame for all of these attacks by turning a blind eye and continuing to say there are no gay men in Chechnya. On the one hand, they have actively popularized “traditional religious values.” There are literally no human rights for the LGBTQ people of Chechnya and very few rights for those in Russia. By denying that these crimes against gay men exist it also allows the undocumented detention of those who speak out against Putin.

Although Russian media gives this no coverage LGBTQ Chechens are demanding strict observance of Russian federal laws in Chechnya and preservation of the Russian state’s secular nature. They constantly insist that religious fanatics who are calling for violence be punished according to the law. They are demanding an investigation into allegations of widespread torture and executions of gays in Chechnya and severe punishment for the guilty parties, including government officials.

The LGBTQ protestors worked hand in hand with the movement “Open Russia” led by Mikhail Khodorkovsky. Khodorkovsky has described Open Russia as “A ‘horizontal alliance’, explaining: What is needed now for effective resistance is not a party with yet another ‘vertical’ structure, eager to fight for power, but a ‘horizontal’ alliance of the vast number of ‘small civic groups’ that form the underlying fabric of civil society and that solve their own concrete problems locally.” (source) 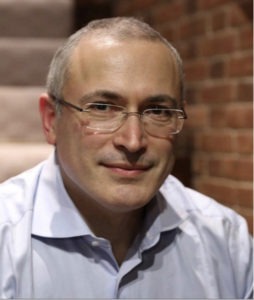 One of Open Russia’s current projects is a Human Rights Project, in particular supporting, and providing legal assistance to, political prisoners which assists families of political prisoners, who find it difficult to travel the long distances to remote camps and colonies.

Today, May 1st, Varya Mikhaylova wrote “When the St. Petersburg Legislative Assembly passed its infamous homophobic law several years ago, there was no popular outcry against the law on the part of Petersburgers, the vast majority of whom are not Muslim and thus cannot be suspected of adhering to “medieval Muslim values.” Nobody but a handful of people “rioted” in the streets, and as far as I can tell, Petersburgers still, inexplicably, regard themselves proudly as “Europeans,” although they have this disgusting “medieval” law on the books, and many of the same local Petersburg riot cops (OMON) who wearily drag them into paddy wagons and kettle them when they occasionally want to exercise their constitutional rights to freedom of speech and assembly.” (source)

This is a time of crisis in the LGBTQ international community. President Kadyrov of Chechnya is exterminating gay men in a modern day holocaust. The world must act now as Kadyrov has promised to exterminate all gay men in Chechnya by May 26th, the start of Ramadan, the High Holy day within the Muslim religion.